Alan Turing and The Imitation Game

Sometimes things happen in clusters. Or perhaps it just feels that way because, having been alerted to the first ‘something’, we then notice similar somethings all over the place…

Okay, apologies for that rather metaphysical beginning, but I am seeing a rather interesting cluster at the moment, and it all began with the movie The Imitation Game.

The Daughter and I went to see The Imitation Game a couple of days ago as my birthday treat. Why? Because the movie is about Alan Turing, the father of modern computers, and you all know how much I love computers… -cough-

Like many people, I knew of Turing, not because of Enigma, and the World War II code-breaking, but because of his test for computers. In essence, Turing’s idea was to get a judge to ‘converse’ blindly [using a keyboard and screen] with a human being and a computer. If the judge could not pick the difference between the human and the computer then the computer could be said to be ‘intelligent’.

Did a little bell just go off? Yes, well done – intelligent computers are the Holy Grail of AI research, so you can see why I’d be interested in Alan Turing. But the movie delivered a great deal more than just some dry recital of computer history.

For the Daughter and I, two things really stood out from the movie – that Turing was gay [I hadn’t known that] and that Joan Clarke, one of the other codebreakers, was just as brilliant as he was. Two brilliant people, arguably two of the most brilliant people of the 20th Century, and one was gay while the other was a woman. [And yes, I looked it up, Joan Clarke was a real woman]

Now, I’m a humanist rather than any other flavour of -ist, but right then and there, I would have waved my little flag if I had had one. Bloody hell – a gay man and a woman!

If I were gay I would compile a list of all the brilliant people in history who were gay, and right at the top I’d put Alan Turing’s name, along with that of Leonardo Da Vinci, so everyone could see what a massive contribution gay people have made to the world. Then I’d sit down and compile another list, but this one would be of women who have made a massive contribution to the world.

Why? Because human culture has for too long assumed that everything good ever created or discovered was done so by straight men.

Hmm… and while I was at it I’d probably start combing through the history books of China and India and the rest of the non-white world for the people who created all the things we in the West don’t give them credit for. But that’s a rant for another day.

For now let me just say that the movie was excellent. Benedict Cumberbatch is an extraordinary actor who seems to excel in these slightly quirky roles, while Keira Knightly actually managed to come across as a slightly awkward, but very smart Joan Clarke. Definitely the kind of movie I’d see again.

Going back to the inequities of history, however, and the prominence of straight white men, my eye was caught this morning by –

“Why do discussions of creative genius so often happen about white male writers such as Jonathan Franzen? ”

The article is concerned with the lack of representation of women in literature rather than science, but great minds are great minds no matter what subject they explore.

A happy side-effect of discovering that article was that it led me to a site called Science 2.0. I’m not sure if the site itself is Australian, but the three articles I read were all written by Australian academics. I think the site is like a wordpress for geeks. 🙂

I know two instances of anything do not a cluster make, but I suspect you out there will have other examples for us to share. It goes without saying that I’d be really happy if you did share in comments!

Just had to add this artist named by Candy Korman – Artemisia Gentileschi 16th Century, Italy. This is her self portrait. But look at the angle! 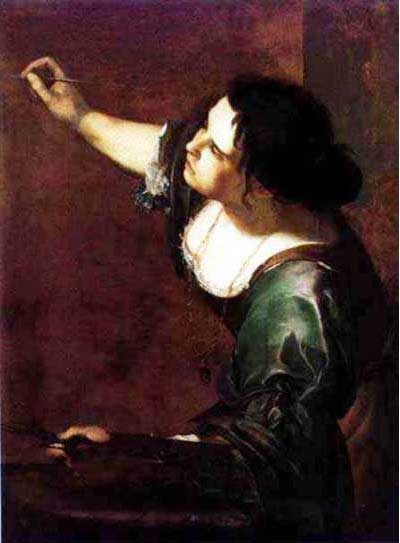