Flying. We’ve all had the dreams, and most of us have travelled at some point in our lives, so we know what it’s like to be up in the air, flying through the cloud layer. Or looking down, and seeing cars the size of ants. But back when I was young and stupid, I had the glorious experience of flying in absolute silence, with nothing to hold me up but the air. I’m talking about gliding of course:

As you can see from the photo, gliders have no engine at all, and rely on those incredible wings to stay in the air. Getting up into the air usually requires a ‘tow’ from a plane that does have an engine. The two are connected by a long cable and the plane literally pulls the glider up into the air. Once they’re high enough, the cable disconnects and the glider is on its own.

The most amazing thing, however, is being in the air. I was only ever passenger material, but I’ll never forget how amazing it felt to be up there, cradled in the thermal, watching the world change around me.

A thermal is a column of warm air that rises until it cools [at the top]. Birds and glider pilots use thermals to gain height and spiral up inside the thermal. Once they’re high enough, they can glide for miles until they reach another thermal, or decide to land.

Part of the reason I gave the Vokh and iVokh wings was because I never forgot how wonderful it felt to glide. Not all iVokh are good at flying though. In the following short excerpt, the main character [the Messenger] is trying to catch up to the caravan [on the ground] that had left without it. An expert Flyer is sent up to help:

Up in the air, the Messenger was focused so hard on reaching the cluster of tiny dots on the distant hillside, it did not notice the Flyer approaching. It almost stalled when the small Trader suddenly dropped down on it from above.

“What doing here Messenger?” the Flyer shrilled into the wind as it cupped its wings to match the slower speed of the healer.
“Caravan…” the Messenger huffed.

The two iVokh flew side by side for a short while in silence as the Flyer tried to send a message to the Apprentice. The small Trader only had a very weak talent, and was not having much success until it suddenly felt the Apprentice bridge the gap between them. Huffing in relief, it quickly informed the Apprentice who was coming, and why.

“Thinking Messenger being very determined,” it added, “because not being very good flyer…”

There was a short silence before the Apprentice asked, “Can helping Messenger flying this far?”

“Can helping Messenger flying easier,”the Flyer sent back. “But healer already looking exhausted.”
“Doing whatever can,” the Apprentice sent back.

“Messenger!” the Flyer shrilled. “Flying into wind being too hard. Following!”

The Messenger was well aware that flying into a headwind was difficult; it had been battling the wind since leaving Two Rivers. Unfortunately, it simply did not know any other way of reaching the caravan.

“Not…turning back!” it wheezed as it continued pumping its tired wings into the wind.
“Ki!” the Flyer shrilled. “Taking to caravan!”

Despite the Flyer’s assurances, the Messenger continued straight ahead for a long moment before finally nodding in agreement. Even so, when the Flyer began banking to the left, away from the hills, the Messenger had to force itself to follow.

Its wings wobbled, threatening to lose their grip on the air as the wind began pushing it sideways. Panic was very close when it finally felt the sudden uplift of a thermal beneath its wings.

Delight erased fear as it rose effortlessly on the current of warm air. The Flyer had been right. It was much easier flying with the elements than against them.

I hope you enjoy this vicarious bit of flying. 🙂 Have any of you flown? Are any of you pilots? Gliders? Would love to hear your experiences.

Oh, and you can find direct links to the free download of Vokhtah here.

I needed some cheering up and found this amazing image on jigsawplanet.com:

The caption read only ‘Turkey’ so I didn’t like my chances of learning more. Wrong. This place is famous with a capital ‘F’ and, as you’ve probably gathered, it’s called Pamukkale.

I’m not doing free advertising for this tourist company, just love their photos, particularly the sunset one: 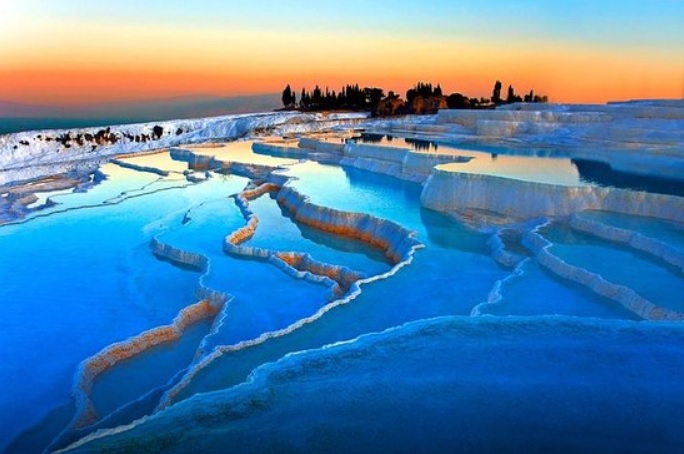 Now I’m off to bed to dream of flying to Pamukkale in my Lear jet…:)

In Innerscape, I imagined an immersion ‘tank’ as the the technology for the top end of virtual reality gaming, but this suit is miles better. And its technology is perhaps five years away, not 80 plus.

If you don’t want to watch the video, have a look at this article from Gizmag:

More and more, I’m realising that the future is now. Heaven only knows what the real future will bring!