I promised you all a treat today so I’m stepping into the wings as freelance writer and author Candy Korman takes centre stage. Go Candy!

When Meeka asked me to share the back-story on Bram I was honored and then embarrassed. I was embarrassed because it means revealing my wacky process. You see, “Bram Stoker’s Summer Sublet” started with a violin player living next door. He’s very nice looking, but I only see him in the evenings and… No, my vampire Un-Romance is definitely not autobiographical. The genesis goes back to growing up with those old Bela Lugosi movies on TV. “I want to suck your blood,” was more funny than scary, but it was intriguing and I know I’m not alone in my romantic dance with the vampire image.

Back to the embarrassing back-story and my process, I often stumble on ideas, snippets of assorted ephemera, that roll around in my head for a while, mixing and mingling until they glom onto other bits & pieces to form the background, character or hook for a story. Meeka was among the participants in a blog conversation on my Candy’s Monsters blog: http://candysmonsters.com/ that led immediately to a new short story.

I had posted a short riff on the kind of vacations a monster might take. I imagined a lonely vampire living at an island resort and in no time I was asking for ideas about rum punch names and scribbling what became “Hurricane Castle.” That’s how I “make” a short story. Longer works of fiction take much more time, but the process of gathering and filtering and shuffling and playing, is pretty much the same.

Beware of young ladies who walk in their sleep!

I did not want to write an imitation of “Dracula,” so I took the epistolary form and updated it, mined “Dracula” for character names and subtle descriptive details and then let go of Bram Stoker’s story. Well, not exactly. I didn’t really let it go; it hovered. There is a great and terrible loneliness and sense of isolation in “Dracula.” That kind of isolation is a key element in “Bram Stoker’s Summer Sublet.” Willie is not visiting a faraway castle to get a mysterious stranger to sign some legal documents, but she is living a subway ride away from her usual haunts and her temporary home is a weird sanctuary, a place to hide, while she gets her act together.

Her strange castle is an apartment on Tompkins Square in the East Village in New York. If you know Manhattan, you’ll know that there are many important landmark “squares” including: Madison, Cooper, Union, Tompkins and Washington Square. I live near Union Square and lived in a dorm off Washington Square back in my college days at New York University. Even if you’ve never set foot in the city, Washington Square will ring a bell because it’s the name of the famous Henry James novella set on that square.

My original title for Bram was “Tompkins Square” in homage to the James masterpiece. My protagonist, Willie, is not at all like the good-hearted, yet unattractive heiress that Henry James created. But how the lovely Olivia de Haviland was cast in that role in the 1949 film (“The Heiress”) is something that Willie might ponder during one of her long walks with the dog.

That trek with the dog circles us back to the back-story/process that mixes and mingles various influences. While Willie is in her self-imposed isolation, recovering from a romantic disaster, her mind is a sponge absorbing — seemingly without a sensible filter — extraneous facts, images and ideas from everything and everyone around her, including Jerry Springer, Oscar Wilde, her horoscope in the newspaper, postcards from her former fiancé, email “fun quizzes”, voicemail messages from her mother, conversations with strangers, etc.

In some ways, Willie’s method for processing her grief and moving on with her life mimics my own process for writing a story and that’s pretty darned embarrassing!

Conceptually, the Candy’s Monsters ebook series offers me the opportunity to explore voices, styles and story-telling techniques in the relatively short format of a novella, as well as the chance for me to revisit the MONSTERS of my childhood in their original form — without the distortions of “Creature Features,” Roger Corman and Vincent Price. That’s how “The Mary Shelley Game” — my Frankenstein, became a Suspense/Mystery and “Bram Stoker’s Summer Sublet” became my Vampire/Un-Romance/Comedy.

I’m working on the third monster right now. It’s called POED — yes, I’m using Poe as a verb in the past tense. I want my readers to get Poed (alarmed, tickled, disturbed, frightened and swept away in Poe-like paranoia) by my contemporary story set in the Usher Clinic for the Criminally Insane.

I don’t know if other writers feel this way, but I’m always in love with my current project. I have zero objectivity until later when I see all the flaws. That’s when I feel dreadful and hate my work. If it’s actually good, I grow to like it again later. I hope to have POED done and ready to be e-published by the end of 2012. I’m already booked to do a reading from it at the semi-annual Poe Room night at NYU in December, so I’d better get cracking. A black cat, a purloined letter and a deadly pendulum await me!

Short stories by Candy Korman are included in the Mardibooks Collection “Unexpected Tales from the Ends of the Earth” to be e-published in August 2012 http://www.mardibooks.com 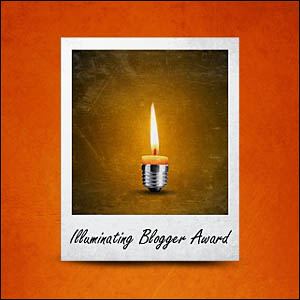 I’m not sure what it is about these awards that turns me into a fumble-fingered ignoramus but I inevitably mess up in some way and today has been no exception. I tried to follow the instructions to the letter and thought I’d succeeded until, shock horror, I realised I’d put my acceptance comment in the wrong award.

So before I do anything else I must apologies to Food Stories Blog for being an idiot. As Bluebottle* would say – “I feel a proper fool.”

Now that I’ve confessed I can move on to step 2 of the instructions. I’d like to thank Lord Daud for nominating me for this award.

David is one of those incredibly generous people who spend a great deal of their time helping others achieve their dreams. His most recent gift of friendship was to email me with a long list of short story competitions. He did this because he knew that I would skin a cat* forever before finding the courage to look for them myself. That gentle, not so subtle nudge pushed me into entering 2080 into not one but two competitions. I don’t expect my first short story to win anything but just entering it was a huge achievement for me and will give me the courage to enter other competitions in the future.

Now, according to step 3 of the instructions I have to reveal one thing about myself. I doubt that anyone will be surprised when I say that I’m a little challenged in the courage department. I’m a miniature tiger when it comes to defending others but I’m a chihuahua when it comes to promoting myself. This is not a good trait in someone thinking about becoming an indie author. All I can say is that I’m working on it. Baby steps so far but I am trying. So thank you David. 🙂

This is my third award and I would really like to say thank you to everyone I’ve met online but I’m limited to nominating just five bloggers. This makes things bloody hard I can tell you. In the end I decided to go with the theme of indies, so now I would like to celebrate bloggers who have shown me that being an indie author can be synonymous with innovation, beautiful prose and a level of quality that puts many traditionally published authors to shame. They’ve inspired me and I’ve loved reading their books. Thank you one and all.

Candy Korman for her innovative fusion of literary monsters and crisp, modern prose.

Lord David Prosser for his gentle humour and wonderful way with words.

Rachel Abbott for her compelling thriller that took the genre to a whole new level.

Stephen Faulds for his beautiful portrayal of love and falling from grace.

M. Edward McNally for creating the kind of fantasy world I would love to live in.

*Bluebottle : a favourite character from the 1950’s radio show The Goons.