I’m posting this picture because an online friend mentioned how hard it was not to be able to share coffee and a chat with her friends. That’s something I’ve missed as well, so I’m going to share some home baked ‘something’ once a week.

When the ‘something’ is home made, I’ll share the recipe, but I don’t bake all the time so it may just be a pic of coffee [or tea] and a biscuit. 🙂

If you feel like doing the same, please leave a link to your ‘coffee and cake’ post in comments so we can all share a chat and a bit of togetherness.

Okay, I’ve already posted about the cheese scones so click here to see the recipe. No apologies for cheating. 😀

As I explained in the post ‘The Omnibus hits a pot hole‘, I can’t make Innerscape directly available on the Kobo ereader because Rakuten won’t allow me to use ‘acflory’ as my name. -rolls eyes- But where there’s a will, and a lot of help from a friend… ta dah, a workaround!

The friend in question is Dawn from DawnGillDesigns. You may also know her as the Silversmith. Anyway, I knew Dawn used the Kobo ereader so I contacted her and asked her to see if she could download the epub version of the Omnibus from sync.com, and read it on her Kobo. These are the pics she sent me: 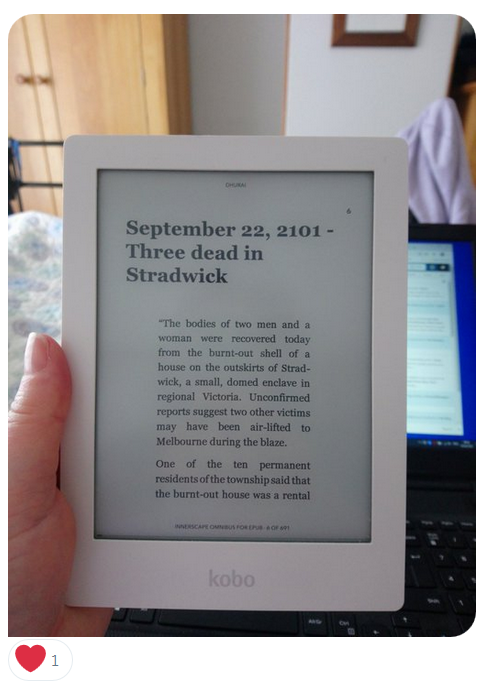 This was straight out of the box, so to speak. The next one is after she adjusted both the font and the margins: 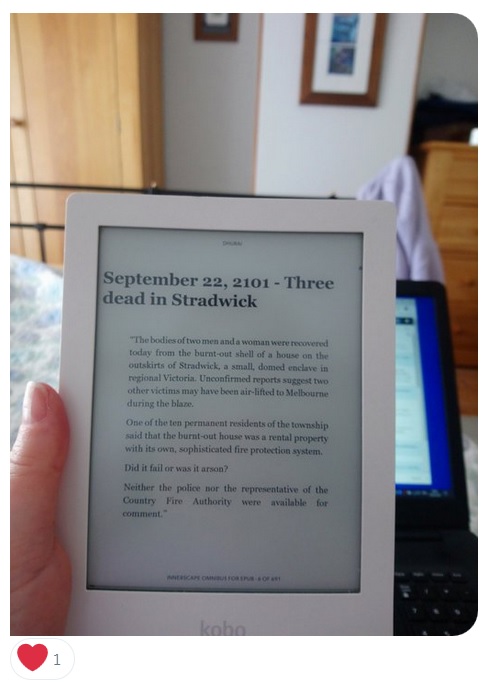 Proof positive that the epub can be sideloaded onto the Kobo! But how did Dawn do it? And was it hard to do?

When I quizzed Dawn about her method, this is what she wrote back:

‘It was super basic. I clicked on the link you sent me. My virus scanner scanned it, and then I plugged in my kobo. This automatically brought up a pane within file explorer, so I was able to drag the download icon at the footer of my browser window across. Then I ejected my kobo, by right clicking on the USB icon, and let it do it’s thing. Even easier than a library book, because all I had to do was drag and drop.’

So me lovelies, you too can download the Innerscape Omnibus onto your Kobo ereaders, and here’s the link to do it:

The ‘for Kobo’ link on the sidebar to the right will also take you to the same download link.

The Omnibus is free for everyone stuck at home during this global lockdown, and you won’t need to sign up or register or do anything at all. As with the PDF version, simply click the link and follow the onscreen instructions. Then follow Dawn’s instructions to sideload the epub file onto your Kobo ereader.

All I ask is that you don’t try to get some kind of commercial gain out of it. This is my gift to you. Read, share, enjoy, and #StayHome .

What would we do without the #internet?

Last night, The Offspring and I faced an evening of utter misery – no emails, no WordPress, no jigsaw puzzles and no GAMING! -wail-

We did have our Kindles, and we did have the TV, but as the ratings season has not begun yet, there was nothing on the TV worth watching. I suspect we would not have watched it even if there had been because the internet eclipsed the TV long ago, at least for us. We only have five main TV channels so the degree of choice is fairly low. By contrast, the internet has literally everything.

As a teacher, I’ve long known that ageing Boomers would benefit from the freedom and connectedness the internet provides, but even I was surprised by how pervasive it has become in my own life. It entertains me whenever I want or need to be entertained, it connects me to friends all over the world, and it’s also there when I’m working. Need to check a fact? Just Google it. Need to find a half-remembered quote? Google it. Need a smart sounding saying in Latin? Google it. Need to find out how to do something? You guessed it, Google again.

But Google would be nothing without all the information it searches.

And right there is the true power of the internet. It’s like an ever expanding, shapeless repository of knowledge that is being added to and tweaked every moment of every day by someone somewhere around the world.

This giant amoeba of knowledge is not organized as neatly as a Wiki, and you have to know how to phrase your question to find the answer you need, but it’s all there, 24/7, 364 days of the year.

Except when it’s not.

Having learned to take all this knowledge for granted, what would we do if it were suddenly taken away, from everyone? And no, this is not the beginning of a new science fiction story, although it would make a good one. I am genuinely concerned.

Now I know that ‘owning’ knowledge is nothing new, we’re living with the consequences of patenting information every day. But can you imagine how much worse things would be if all the other knowledge in the world were no longer shared either?

As a species, homo sapiens has progressed fastest when knowledge was shared, freely and without favour – think of the explosion of creativity that occurred during the Renaissance. If we lost the internet we could easily lose much of what we have gained over the last two hundred odd years, going from the age of enlightenment to a modern dark age, virtually overnight. And then we’d fight wars over what was left.

Of all the infrastructure the world can no longer do without, I’d put the internet at the top of the list of things to guard with our lives. What do you think? Am I being realistic or have I simply not had enough caffeine yet this morning?