From disaster to a delicious biscuit

Okay, for my US friends, our biscuits are your cookies so this is a cross between a sweet lemon cakelet and a ‘cookie’. Ta dah….:

The outside is lovely and crisp, but despite being so thin, the inside remains just a tiny bit soft and chewy: 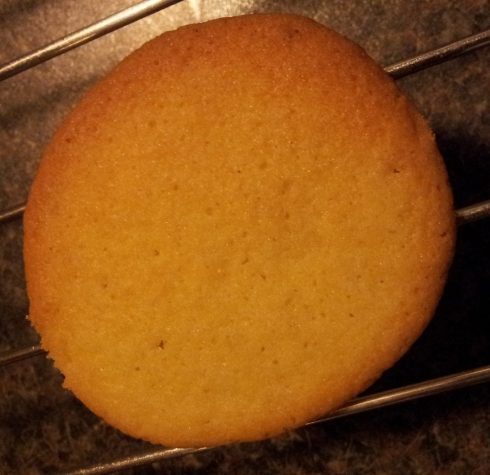 Before I write up the recipe I should explain that this started out as a kind of lemon tart cake that went very wrong. Cakes are not my forte, but I suspect the original recipe was at fault as it called for a tart base made from self-raising flour. Into this uncooked tart base went a very nice, cooked lemon filling and the whole lot was supposed to bake in the oven until it turned into a tart.

I don’t have a picture, but my lovely lemon tart turned into something resembling a soufle. It overflowed the baking dish like Vesuvius and made a sweet-smelling mess of my oven. What little I could salvage tasted like lemon toffee cake. I was not happy.

To cut a long story short, I had just enough unsalted butter left over to try the cake part of the recipe as a biscuit, and at last something worked! Here it is.

the rind of one lemon, finely grated

Pre-heat the oven to 160 C [if using fan-bake] or 180 C if just using the ordinary oven setting [this is a moderate oven].

Line baking trays with baking paper. [You will need more than one tray as the biscuit mix spreads out quite a lot as it bakes so the biscuits have to be spaced fairly wide apart].

Toss the flour, sugar and grated lemon rind together [to spread the lemon flavour evenly]. Add the butter and cut it into small chunks with a knife, mixing into the flour as you go. Once the chunks are small enough, rub the flour mix and butter between your fingers until the mixture resembles coarse breadcrumbs.

Lightly beat the egg and add it to the butter mix until you get a fairly smooth ‘paste’.

Spoon heaped teaspoons of the paste onto the trays, leaving at least 2 inches between each one, and place in the oven. Baking time is approx. 10 minutes or until the biscuits are firm in the middle and slightly golden around the edges. Allow to cool on the tray if you can wait that long…-rolls eyes-…we didn’t.

The quantity given should make approximately 24 biscuits which sounds like quite a lot, but they are very moorish. If anyone manages to keep some for more than a few minutes I’d love to know how long they last. 🙂

I owe this recipe to my sister-in-law, Victoria. Thank you!

The cake was delicious as Victoria first baked it, but I think my small changes have made it a fraction healthier. But then, who cares about healthy?

* 1/2 a cup of oil will result in a lighter, drier, fluffier carrot cake. If you like yours more traditional, experiment with the amount of oil you add, bearing in mind that 1 cup is probably the maximum, while 1/2 a cup is the minimum.

Serve at room temperature with cream, ice cream or just plain. Or if you’re like us, eat as soon as it comes out of the pan to enjoy the sweet, slightly toffee-like crunch of the outer ‘skin’. Once the cake cools, the skin loses it’s crunch.

The Offspring and I found no difference in taste using purple vs orange carrots, and as you can see from the photo, the purple carrots do not turn the whole cake purple so you can serve it without your guests ever knowing it’s a ‘healthy’ option. 😉