Pesticides in the US and Australia

Chlorpyrifos is one of the most widely used pesticides on American farms, sprayed on everything from strawberries to soybeans. It’s cheap, and it works well; chlorpyrifos is derived from the same chemical family as sarin nerve gas, and kills insects by attacking their nervous system. But exposure to chlorpyrifos is also linked to brain damage…

This article talks about a pesticide called chlorpyrifos, and the harm it can cause. Something that jumped out at me was this:

Pregnant women who lived near agricultural fields where chlorpyrifos was sprayed during their second trimester were three times more likely to give birth to a child who would develop autism, according to a study out of the University of California, Davis.

If there really has been a rise in autism, then perhaps chlorpyrifos is at least part of the problem because the residues on common food can do damage as well. A search for what kinds of foods are sprayed with chlorpyrifos in Australia led me to: 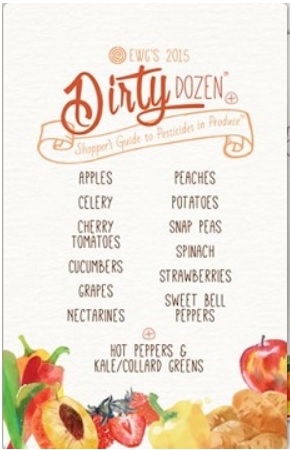 These are the worst offenders when it comes to pesticides, including chlorpyrifos. These are commercially grown foods that we all eat. I almost cried when I saw strawberries, grapes and sweet bell peppers [capsicum] in that list. And potatoes?

I strongly recommend that you read the entire article, including the ‘Clean Fifteen’. These are fruits and vegetables that have the least amount of pesticide residue:

As a final word, the EPA in the US wanted to ban chlorpyrifos, but new Trump appointee, Scott Pruitt, chose to ignore his own agency’s recommendation. Here in Australia we haven’t even gotten to that point yet. Pathetic.