Apples, alpacas and some results

First and foremost, to all those who re-blogged and retweeted my ebook free promotion over the last two days…THANK YOU! There were 40 downloads and I’m grateful for each and every one. 🙂

And now to soothe my frazzled nerves and yours, I thought I’d show you what else I’ve been up to:

Exhibit 1 – one of the alpacas that mows my grass, strips my rose bushes and turns my fruit trees into umbrellas 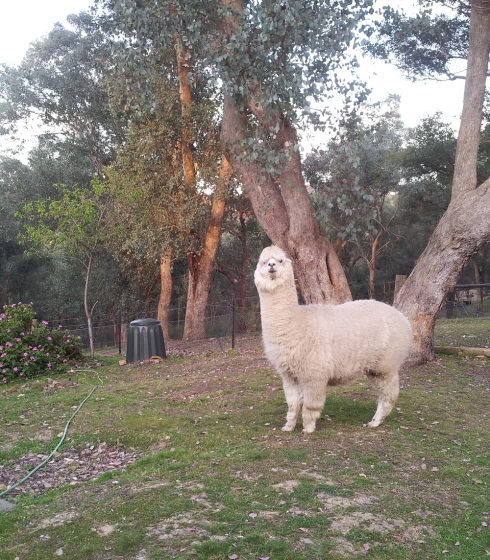 You may also notice that there’s not much grass on the ground. This time last year, the two alpacas would have been chewing through knee high growth. It’s been dry, very dry.

Exhibit 2 – the apple tree inside the new fence 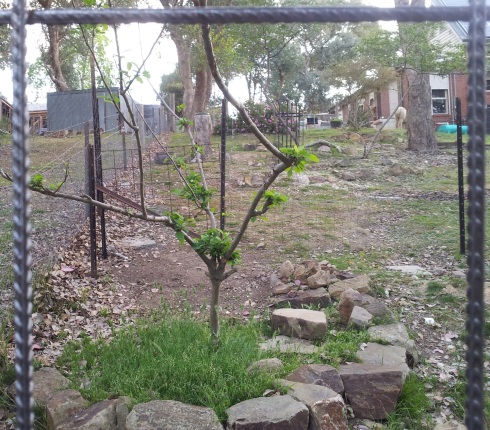 I got  a bit artistic with this shot. 🙂 The metal framing the picture is actually the reo ‘gate’. More on that in the next shot.

This whole project started because I was determined to save the apple tree from the alpacas. Most of my fruit trees are tall enough to survive having all their lower branched pruned into an umbrella shape by the ‘girls’. The apple, however, is kind of a dwarf, and I made the mistake of planting it too close to the fence. As a result, even when the alpacas are locked out, they just reach over the barbed wire and nibble away [that’s why there’s new growth in the middle of the apple tree but not on the ends of the branches].

The first step, therefore, was to put wire mesh above the fence. To do that, I had to hammer some star pickets into the ground and then screw another star picket half way up to increase the combined height [star pickets have holes along one flange so if you marry up the holes you can screw them together]. Then the wire was attached to the ‘posts’.

You can see how the star pickets are attached in Exhibit 3.

The grid of metal wired to the star pickets is the ‘gate’ leading into the fenced off area. The grid is called ‘reo’ by tradies, but it’s official name is ‘reinforced wire mesh‘. Reo is used to reinforce concrete as it’s being poured. The heavy duty variety is also rigid enough to make an excellent gate. And that’s what I did. Haven’t quite finished so the gate is just wired shut for now. 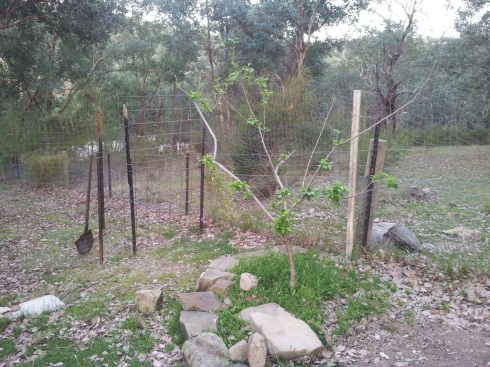 This last pic just shows the wire enclosure around the apple tree. If you look closely you can see the doubled up star pickets and wire mesh.

My hands are covered in bandaids and my back hurts, but seeing the apple tree burst into green makes it all worthwhile.