The City of Bones by Martha Wells

When asked, I’ve always said I prefer science fiction to fantasy because of the possibility, however remote, that some part of the story might be true. Or become true. Some day. Yet if I’m honest with myself, I have to admit that I do love sci-fan as well.

To me, sci-fan is pragmatic fantasy in which the real and the unreal blend seamlessly to create impossible worlds that we nevertheless accept as possible. Dune, by Frank Herbert is probably the best known example of sci-fan, closely followed by Tad Williams’ Otherland. And then there’s Robin Hobb’s Farseer saga. It’s more fantasy than science, and yet the life-cycle of the dragons is no more unbelievable than the metamorphosis of caterpillars into butterflies.

Well now I have a new sci-fan author to add to my pantheon – Martha Wells.

In The City of Bones, Wells tells the story of a young Krismen called Khat. He’s part of a species that was biologically engineered to survive in the Wastes after the land burned and the seas boiled away. But there are human survivors of the destruction as well, and the two species exist in an uneasy alliance against the deadly creatures of the Wastes.

Khat lives in Charisat, a human city, making a precarious living as a relic trader. Relic traders are like a combination of archeologist/palentologist/anthropologist, with a bit of a conman/thief added in, and relics are fragments from the lost world of the Ancients.

That would have been more than enough to grab my attention, but Wells weaves in history, politics, conspiracy, intrigue and a bit of classic who-dunnit to make the story an absolute page-turner. I loved it.

If you like sci-fan too then I strongly recommend The City of Bones. 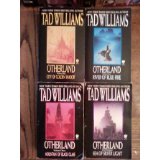 Tad Williams has been one of my all time favourite authors since I fell in love with his Otherland series. Since then my Daughter has become a fan, as has her boyfriend, so I guess you could say it’s a family affair. 🙂

Something else we share in our family is a love of gaming and MMO’s [massively multiplayer online games]. Little wonder then that we have all been waiting for Otherland the MMO.

Otherland online is an mmo that has been in development for something like six years, and is based on Tad William’s Otherland series. But the connection doesn’t end there. Tad Williams has been actively involved in the development of the game, and it has his seal of approval,  so ….

You guessed it, I asked Tad Williams about Otherland online during Supanova [here in Melbourne], and his eyes lit up.

Although Tad is more interested in the social side of Otherland online than in the traditional mmo aspects, we found common ground in the Lambda Mall. For those who have not read Otherland, Lambda Mall is the equivalent of a future Second Life on steroids. It is a place where people go to have fun, shop, and interact with each other. All this interaction happens via avatars that are as basic, or as spectacular as people can afford.

In the Lambda Mall of the Otherland mmo, gamers will be able to hang out with their friends, shop, and generally have fun because for the first time in an mmo, they will actually have things to do in this social hub.

In recent years, I’ve been a fairly solitary gamer because I simply don’t have the time to interact with other gamers during group events like dungeons, or raids. And I do miss that interaction, so I have been following the development cycle of Otherland online with a fair degree of impatience.

That impatience turned to concern when I read of problems with the company developing the game. Naturally I voiced that concern to Tad Williams and he was quick to reassure me that this was just a temporary glitch. Phew!

I’m paraphrasing Tad here but the good news is that Otherland online will be completed in either the US or Canada. Discussions and negotiations regarding this move should be finished within a month and then the beta testing will go on.

At this point, no-one can provide a firm launch date, but both Tad and I have our fingers crossed for the end of 2013.

Needless to say, I can hardly wait. Oh, and did I mention that Tad Williams is incredibly approachable and nice? Well he is. 🙂

Villains – what is it that makes them so sexy?

I was reading an excellent post by Alex Laybourne today in which he asked who we [writers] preferred to write about – heroes or villains.

My immediate response was ‘villains of course!” And then I started wondering why that reaction had been so instant. That lead to thoughts about villains in books that I had read or in movies I had seen. Almost without fail the most interesting characters were always the villains. Why?

In movies, villains are often portrayed as hunky guys oozing danger and sex appeal in equal measure so the attraction is not hard to understand but why does the same thing happen in so many books as well? After all, the author may describe a villain as ‘handsome’ but handsome is just a word and does not have the impact of a three-quarter profile in a close-up. Besides, in books it’s usually the personality that I find myself attracted to anyway.

I’ll admit that for quite a long time I thought there was something a little bit wrong with me until I started talking to other women about this bad-boy phenomenon and discovered that I was not alone. And it’s not something restricted to my generation either –  no.1 daughter is the same and when we first started playing rpg’s together guess who got our attention? Was it Cloud from Final Fantasy 7? Hah! Of course not. How could that angsty namby pamby compete with Sephiroth? I mean come on… even as a pixelated animation that long silver hair was just….

Ahem. I think I’ve made my point. There is something about a good villain that is exciting and yes, sexy and has as much to do with how quickly we turn the pages as any empathy we may feel for the hero of the piece.

Now I need to make a very important point here. When I talk about sexy villains I am NOT talking about romance novel villains. Or heroes.  I am talking about characters in science fiction novels and fantasies and thrillers and, of course, who dunnits. These villains are not out to seduce anyone yet so often they end up being seductive anyway. Why is that?

The only answer I can think of is that the author subconsciously projected that element of seductiveness without knowing that he/she was doing so. Furthermore I think that this element of seductiveness has something to do with the cold, calculating exercise of power. And success. No matter how cold or calculating a villain may be if he is an incompetent bungler then sex appeal goes flying out the window.  And he can’t whinge or whine either – that’s another huge turn-off.

So what the hell is it about villains?  I do have some suspicions but rather than launching into some long analysis that will probably end up being painfully boring I’m going to end this post with a book, a villain, a question and a challenge.

The question : Did you find Dread as compelling as I did?

The challenge : Name your favourite villain [and the book he/she appeared in] and say why in 500 words or less [preferably less!]

May the power of the pen be with us 🙂