Like most Australians I am politics weary. I want it over with… but despite that, I still care.

1. I would like to punish Labor for backstabbing 1 AND 2. Those machinations revolt me, but

2. I believe Kevin07 deserves a chance to finish what he began. He, like Gough Whitlam, has a vision for the big things. Sadly that vision makes him a bad ‘politician’. But if the NBN, Kyoto and The Apology are all we get out of his two terms of office then that is still a damn good legacy.

3. I hate Tony Abbott. I hate his he-man wannabe posturing. To me that is just vanity, the kind of vanity that makes football stars believe they can do no wrong, especially to women. Not saying Abbott would ever rape anyone. Just saying his posturing appeals to a certain kind of attitude I hate. It may make him come across as an ‘every man’ kind of guy but he certainly doesn’t come across as the ‘every’ man this woman likes.

4. I hate the Greens too. They played politics with Climate Change, and much of what we have, or don’t have six years down the track is thanks to their stupidity and holier-than-thou posturing.

5. I hate the spin. I hate the spin so much I start to feel physically nauseous when I hear politicians start parroting whatever crap the spin doctors think will win hearts and minds. “We will send back the boats”. “We will buy up fishing boats.” Puleeze… Does anyone in Australia really believe the Indonesians are just going to roll over and accept this kind of bullshit?

6. I actually believe this period of hung parliament/independent influence has been a good thing – not in every detail, but as an exercise in co-operation. At best, every ruling party will have just over 50% of the first preference vote. No matter how you play with the numbers, that means an awful lot of people don’t agree with their policies. So forcing parties and independents to co-operate allows more of the voting public to get what they want. The standout exception to this was the Liberal Party. They voted against anything and everything, even the things they originally voted for.

7. I believe the role of government should be similar to a not-for-profit. The benefits from taxation should be plowed back into the country to create more wealth and well-being for people. Yet the stated aim of Liberal governments is to create a surplus while supporting business so business will support people. To me this is like putting money in the bank while allowing your kids to go barefoot in winter.

8. And last but not least, Julian Assange and Wikileaks are heroes of mine. The Big Brother mentality triggered by 9/11 is not that different to the anti-communist hysteria that swept the world during the McCarthy era in the US [1950’s]. Destroying people, and their rights, – because you fear some bogey man – is a cure far worse than the disease. Sadly that is what is happening now in this new century. I have to support the few madmen who say this is wrong.

For all those reasons I voted for Labor in the House of Representatives, and Wikileaks in the Senate.

That’s okay. Debate is the single most important benefit of a democracy. All I ask is that any debate that happens here on Meeka’s Mind be reasoned, and respectful of others. Please argue your point with as much passion as you want, but do not try to win that argument by putting others down. That’s just not on, and those kinds of comments will be deleted.

This title may sound a bit tongue-in-cheek, but I assure you I am quite serious, and so apparently is Julian Assange. 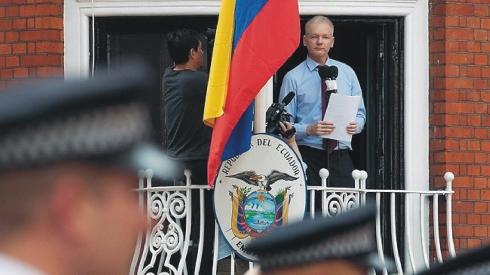 According to the ABC news this evening, Wikileaks the political party will be on the ballot papers when Australia votes in September.

To be honest, I have no idea what kind of policies a Wikileaks Party would espouse, and I don’t care. As far as I’m concerned, an organ grinder’s monkey would be better than what we have at the moment, or are likely to have under Tony Abbott [and the Greens scare me]. Besides, Wikileaks will be lucky to win even one seat. Nonetheless,  I will vote for them because I don’t want to cast a donkey vote*, and until tonight, that seemed to be the only option open to me.

Now some of you may think voting for Wikileaks is just another way of casting a donkey vote. I beg to differ. A donkey vote sends no clear message. A vote for Wikileaks, however, would say ‘a pox on both your houses’ ** in bright blue neon.

And if, by some miracle, Julian Assange or one of the other Wikileaks candidates did get in, we could be sure of one thing – none of them would be singing out of the current political song book. I see that as a refreshing change.

* A donkey vote is essentially either a blank ballot, or a ballot with a mistake on it. For example, if I wrote ‘No!’ on a ballot instead of ticking one of the boxes, my vote would not count, and my protest would remain unseen.

** The original quote from Shakespeare’s Romeo and Juliet is most likely to have been ‘a plague a’ both [your] houses’ but I prefer the less kosher version.