Can you see what I see…?

Life’s been rather hectic of late, so my posts have been more sporadic than usual, but today I want to show you something that I think is quite wonderful. And no, I’m not going to tell you, I’m going to show you.

Have a look at these three screenshots and tell me what you see: 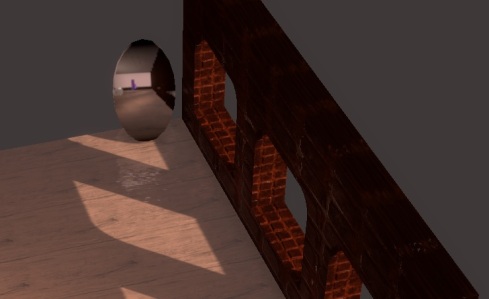 Yes, all three screenshots are computer generated. And yes, they are all from a game, but the amazing thing is the mirror.

I’ve been playing games of one sort or another for close to 20 years, and in all that time I’ve never seen a mirror used in any game I’ve ever played. Now, it may be that I’ve played the wrong sort of games, or it may be that mirrors use up too many resources, or… Whatever the reason, mirrors haven’t been a part of the graphics, and I have always felt the lack.

Reflections are such a fundamental part of how we see the world, and ourselves.  Think about it. We catch sight of our reflection a hundred times a day – in mirrors, shop windows, highly polished tables, glossy cupboards, ponds, even spoons. They are everywhere in the real world, but not in the virtual world, and to me it feels odd. Like not having a shadow.

Remember when gaming graphics were so primitive that no one even dreamed of adding shadows? Now they’re commonplace in most games with high end graphics. I predict that one day soon, reflections will become just as commonplace as shadows because they add an almost subliminal element to our ability to immerse ourselves in a virtual environment.

For now, though, my friend George is the trail blazer in this area. The mirror is his, as is the game, and I think both are going to be quite extraordinary.