It’s only half way through September, and the grass is still green, but scratch an inch or two below the surface, and the ground is bone dry. Or at least it is in hilly Warrandyte where the rain flows off long before it can properly soak in.

So, I’m worried about the fast approaching bushfire season. East Gippsland is said to be most at risk this year, but the Green Wedge in Nillumbik Shire can’t be too far behind. And we have more people living in the shire:

‘The Nillumbik Shire Estimated Resident Population for 2017 is 64,626, with a population density of 1.50 persons per hectare.’

That’s a lot of people, but when you look at where most of them live, the figures take on a deeper meaning: 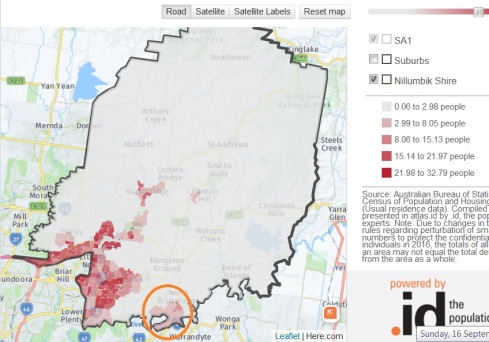 The area outlined on the map is the Shire of Nillumbik. If you read the legend to the right of the map, you’ll see that most of our population clusters in the pink and red areas to the south [the pink area circled in orange is my area, North Warrandyte].

An important feature not shown on the map is that much of the southern part of the Shire is intersected by the Yarra River. 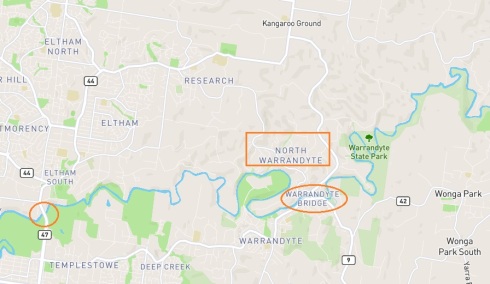 The two areas circle in orange represent the two bridges that are the only way of crossing the Yarra from my side of the Shire.

The Offspring and I live on the north side of the Yarra, so we have to cross the Warrandyte bridge to get into Warrandyte Village, and from there to somewhere further south.

That bridge is currently being extended from 2 lanes to 3, but it’s not finished, and access is even worse than normal. Going in the other direction, we have to go through Eltham and cross a second, 2 lane bridge to get south of the river.

Guess which direction the worst bushfires come from! Clever you, yes, the north. Caught between fire and water, lovely.

Now, let’s have a look at the terrain around Nth Warrandyte. This is an aerial view of the area around the bridge:

A feature you can’t see from that aerial photo is the terrain. Up hill and down dale describes it pretty well. The perfect playground for bushfires that love racing up hill.

All that dark green stuff? Gum trees and scrub, all of it native and all of it evolved to burn. My block is  relatively open, but further from the main road the blocks are densely treed and the only way in or out is often via dirt roads.

I have every fire protection under the sun. Most of the houses in my area have nothing. Even the pre-school and CFA fire station are nestled in amongst the trees with no in-ground water tanks, roof sprinklers or fire-resistant shutters. The area is a bushfire disaster waiting to happen, and Nillumbik Shire Council has done nothing to mitigate the risk, for years and years and years. If you’re interested, here’s a post from May, 2017 that looks at the Council’s budget for bushfire mitigation. Yup, they really take it seriously…

So, I’m worried, but this year there may just be a bit of hope on the horizon. Two years ago, an organisation called Pro-active Landowners [PALs] became a force to be reckoned with, and the Council elected in 2016…changed.

The following recommendations are taken from a recent PALs submission to Council:

Essentially, PALs is recommending that the bushfire danger in the Shire [which is huge] be managed.

It sounds so simply, yet for decades, Council has done anything but. I don’t know whether the interest group within the Council felt that nothing could be done to manage the risk – i.e. act of god etc. Or they were so determined not to let big, bad developers ‘ruin the green wedge’ that they were happy to see it all burn instead.

Council mitigated nothing while tying the hands of the CFA [the Country Fire Authority is supposed to save us from bushfires]. Worse, Council stopped landowners from protecting themselves either. You have no idea how good it feels to finally have a voice.

If the PALs recommendations bear fruit, we will finally be able to reduce the fuel load in the Shire. Fuel load is the leaf litter, twigs, branches and undergrowth that feeds a bushfire, and Warrandyte has masses of it. But even if every resident of Warrandyte cleaned up religiously, there are great swathes of public land that are virtually untouched because the previous Council wanted to keep things ‘natural’.

The irony is that the Green Wedge is anything but natural.

Pre-settlement, the Aboriginals used to manage the land by doing many, small, cool burns. These cool burns created a patchwork of burnt and unburnt land so that the native fauna had somewhere to escape to. The net result was that the fuel loads never grew too high.

In areas not managed by the Aboriginals, nature itself managed the land with lightning strikes. Lightning would start small bushfires that would run until they finally died out. Again, because these small bushfires happened so regularly, the fuel load did not have a chance to become truly dangerous.

And then the white man came along with his English farming practices. Farmed land had to be protected, so bushfires had to be put out before they could do much damage. The net result was that parts of the land were over managed – i.e. the farms – and great big areas were left completely unmanaged, allowing the fuel loads to grow. The character of the land changed, and the bushfires turned vicious. 1939 was a very bad year, and so was 2009.

2009 was the year in which ‘…173 people tragically lost their lives, 414 were injured, more than a million wild and domesticated animals were lost and 450,000 hectares of land were burned’ in the Black Saturday bushfires.

If you’ve ever built a camp fire, or an open fire in a hearth, you’ll know that fire needs just two things to burn – fuel and oxygen. That’s why you build a teepee of twigs and dry kindling to start the fire. The open structure allows air in to feed the flames. After the fire is going though, the kindling is no longer needed because hot air rises, sucking in cooler air from below.

A bushfire does much the same, and the bigger the fire the more powerful it becomes, preheating the fuel ahead of it so it will burn even faster. The Black Saturday fire was so powerful, it generated its own weather.

No amount of human technology could have stopped the Black Saturday fires once they started. But a bit of wisdom might have stopped them from starting, or at least reduced the loss of life. But we weren’t wise.

Two acknowledged experts in bushfire behaviour submitted reports to Nillumbik Council prior to Black Saturday. Both reports warned about the dangerous levels of fuel in the Shire. Both reports were ignored. 9 years on, the lessons still have not been learned: when it comes to bushfires, fuel load is the only thing we can actually control.

The Black Saturday Royal Commission recommended mandatory prescribed burns of 5% to public lands each year. They haven’t happened, and part of the reason they haven’t happened is because of the bureaucratic red-tape that’s required before a burn can take place. Sadly, the weather rarely keeps these kinds of ‘appointments’ so either burns are cancelled because the conditions are all wrong – rain or high winds – or they go ahead in less than optimal conditions. And sometimes they get out of control. So even less incentive to do burns.

I’m no expert on bushfire management, but I can’t help wondering why we can’t let the CFA do mini burns every single day that the weather conditions are suitable? Why do burns have to be these big, dangerous things?

When I burn off, I do lots of smaller piles rather than one huge one. It makes sense to me. Mini burns, often. It would work, why can’t we at least try it?

The PALs submission to Nillumbik Shire Council may not solve all our bush fire woes but it would be a huge step in the right direction. Fingers and toes crossed that commonsense finally prevails in the Shire of Nillumbik. 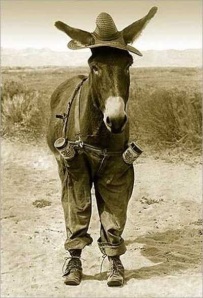 Despite countless examples of bushfires triggered by controlled burns gone wrong – set by professionals, mind you – some donkey is burning off today. I can see the smoke rising up through the trees across the valley from my house.

It’s not hot, yet, but there’s a strong north-easterly blowing, and wind is the element that turns an ordinary bushfire into a potential inferno.

Burning off on a windy day is just asking for trouble. Gum leaves burn even when they’re fresh and green.

Unfortunately, today hasn’t been declared a day of Total Fire Ban, so there’s not much I can do about Donkey-Boy across the valley. All I can do is sit, rant, and hope he’s standing next to that fire with a garden hose at the ready.

The thing that worries me most, though, is that Donkey-Boy probably thinks he’s doing the ‘right’ thing. He probably works all week, and only has the weekend for chores, including fire prevention chores. He probably had other chores to do yesterday, when it was warm but windless. So today he’s catching up. Yay.

I don’t know exactly which house belongs to Donkey-Boy because there is a sea of trees between my house and his, but I know the general position. Up on that hillside are a number of brand new houses. I can only assume the residents are also new to Warrandyte. Clearly they know enough to clear up the fuel load on their properties, but they don’t know enough to know when it’s safe to do so.

To be fair, it did rain heavily two days ago, so the chance of a fire going out of control is minimal, but you’d be amazed at how quickly things can dry out in Warrandyte. One day the ground is soft and moist, the next you can hear gum leaves crackling underfoot. The reason is the lack of deep topsoil and the steep terrain. Rain tends to run off before it has a chance to soak deep into the clay subsoil. Ergo, things dry out, fast.

And we have a mono-culture of red box gums.

Let me tell you a story about gums. This story was told to me by my whippersnipper man*. He was working up in the foothills of the Dandenongs a couple of years ago, and he was burning off on a day similar to this one. It was windy and embers floated up in the air. Nothing caught fire at ground level though.

Once the fire was out, my whippersnipper man made sure the coals were safe, packed up and went home. An hour later he received a panicked call from his client : one of the gums was smoking. He raced back and was just in time to stop the whole canopy from going up in flames.

“What on earth happened?” I asked, half wondering if he was pulling my leg. He wasn’t.

Apparently an ember had floated up into the gum tree, landed in a fork and smouldered until it had enough oomph to burn.True story.

So the moral of this post is to do your homework, and not do burning off on windy days.

And in case you’re wondering, there’s still a bit of smoke curling up above the trees, but the wind has died down, and there are rain clouds coming in. Looks like neither Donkey-Boy nor I will have to put our fire plans into action today, for which I am truly thankful.