Yes, it’s going to be one of those posts. Let’s start with some pretty pictures, shall we?

First off we have Meeka Thara, one of my female toons on Final Fantasy XIV A Realm Reborn.

Followed by two of my boys.  This one is Takh Ahn

And last but not least we have Nikko Tahn 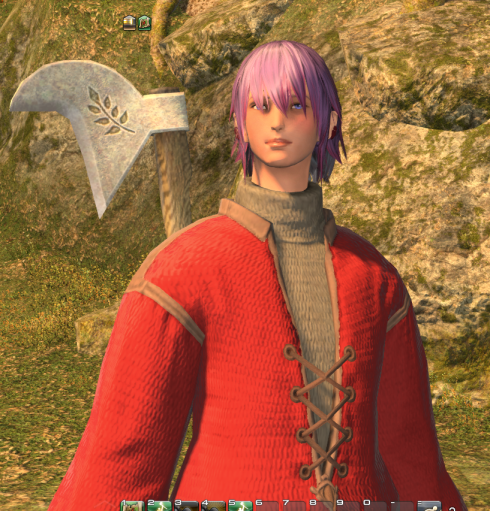 The reason I’m foisting these photos onto you non-gamers is because I’m so taken with the graphics. All of these photos show in-game graphics, not the super-dooper animations they did for the game trailer.  Computer graphics truly have come one hell of a long way in the last decade. And I have to say, Final Fantasy XIV has come an even longer way from its first launch.  Version 2 – A Realm Reborn – is everything we Final Fantasy fans were hoping for, and didn’t get with version 1. I feel as if I’ve finally come home again. Thank you Square Enix. 🙂

The odd bit of french in the title basically translates as smoked-Meeka – you know, like smoked salmon but not so pink. 🙂 I’ve just spent 5 hours burning off in my back yard and I reek. Even the dog is giving me strange looks and she’s not known for her discerning taste. Nonetheless, I’m done, and I’m relieved. All, and I mean all of the storm damage has now been tidied up and I’m that much closer to having my block ready for the coming fire season. Phew.

And finally, a request. Some of you have read my flash fiction entry for this week’s competition. Now I’m asking you to read the other entries because, sadly, they’re bloody good. I still like my story, but I suspect I’ll be voting for Jon Jefferson’s entry, it’s that good.

Anyone can vote so please check the entries out and make your mark on the future of some very good indie writers. You can see all the entries here :

Okay, that’s it, I’m done. Now I’m going to spend a long time in the shower so the dog will like me again. 😉