After the near-debacle of the other day, I realised I didn’t know anywhere near as much about bushfires as I thought I did. So I asked for some help from those who do. The following tips are ‘rule of thumb’ only, but so much better than nothing.

– A north wind will push the fire to the SOUTH. [i.e. the wind is coming from the north so the fire is pushed to the south]

A north westerly wind will push the fire in a SOUTH EASTERLY direction. [i.e. the wind is coming from the north west so the fire is pushed to the south east] 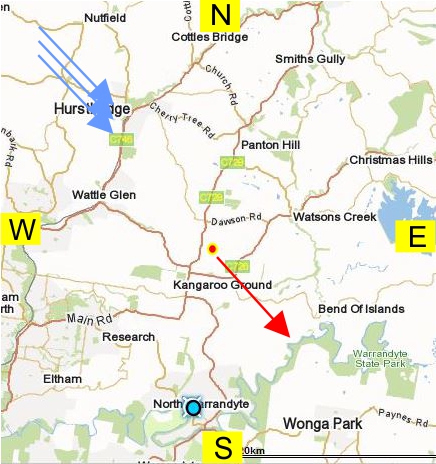 A north easterly wind will push the fire in a SOUTH WESTERLY direction. [i.e. the wind is coming from the north east so the fire is pushed to the south west].

The Bureau of Meteorology posts forecasts for heat and wind on its website every day. This is the forecast wind for today, January 16, 2014 :

“Winds northerly 15 to 20 km/h tending northwesterly in the early afternoon then becoming light in the late afternoon.”

I’ve just been outside [11.15am] and didn’t notice a wind…yet. Once it starts however, I’ll be keeping an even more wary eye on the Kangaroo Ground fire. It’s contained at the moment, but if it breaks out it will be heading south towards North Warrandyte.

“This is obvious, get to the point!”

“This stuff isn’t obvious to everyone, so be patient!”

On a day with no wind, a bushfire will spread out in all directions as it follows the terrain. It will spread, but it won’t spread quickly because it’s burning under its own steam, so to speak.

The graphic shows a very theoretical spread across flat ground – e.g. a field of grass. It’s always the outer edge that’s actively burning because the bit in the middle has already been burned, and fire needs fresh fuel to continue.

[Note: You will never see that neat bulls eye pattern in real life so take this graphic with a huge grain of salt.]

Once you add wind to a fire, however, the pattern of spread changes to a cone.

“But what does this have to do with me?”

“The point is that you can now be proactive! Oh don’t give me that look…”

Okay, what this all means is that you don’t have to sit staring at the CFA website, waiting for warnings and advice. You can grab your street directory, check the Bureau of Meteorology website, plot the direction of all fires within a twenty minute driving radius of your house, and either leave, or start getting ready to defend.

For me, defending my house involves running the pumps and sprinklers for 5 minutes [to make sure everything is working], closing up the house [with the shutters] and wetting down the area directly around the house – with mains water while it’s still available.

You do know that the water is likely to stop flowing if a fire hits your area…right? There won’t be anything wrong with the pipes, it’s just that everyone will be trying to do the same thing as you, and only so much water can come through the pipes at any one time.

If nothing happens, and the fire goes away, then you’ve lost nothing by being proactive. However, if something bad does happen, then being proactive could well save your life. Think about it.

In the next post I’ll try and explain why the wind change is the most dangerous point in any bushfire.