The saga of the flat pack bicycle

Back in January of this year I mentioned that The Daughter had given me an exercise bike for my birthday. And then there was silence.

The reason you heard nothing more about my exercise bike was because it sat in its box, unopened, for a month before I found the courage to unpack it. Then it sat for another week or so, in pieces large and small while I tried to decipher the instructions that came with it.

Exhibit A – the diagram for Step 1. 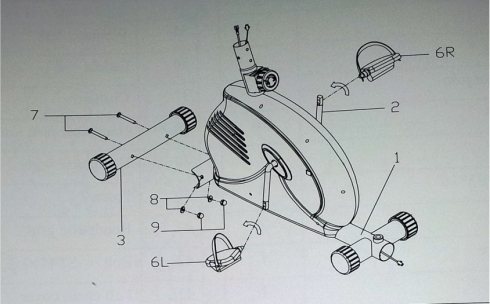 Exhibit B – the instructions for Step 1.

Getting the two pedals on took ages because I had to screw them in counterclockwise. Yes.

Now, before you start thinking I’m some helpless female who doesn’t know one end of a spanner from the other – no! My Dad was an engineer and a hobby carpenter, so I grew up as more of a handyman than most boys. Not an expert, mind you, but not a neophyte either.

The problem with flat packs is that they usually come with the most useless tools imaginable – allen keys, and these toy spanners. 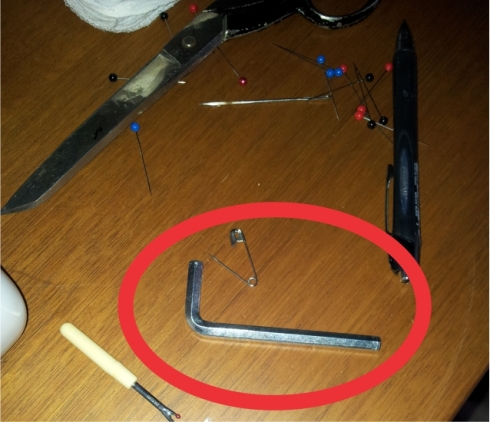 I circled the allen key in red in case you men didn’t recognize the sewing tools also scattered about. For the ladies, an allen key is a six-sided piece of bent metal with flat ends. The flat ends exactly fit six-sided metal ‘holes’. Think screwdriver with a different shaped tip, and no comfy handle.

You insert the allen key snuggly into the hole and then turn it to tighten up the bolt. It should work, so long as the allen key doesn’t shred your hands first. I’m sure allen keys would be a great addition to a Swiss Army Knife, however they suck as a general purpose tool. Unfortunately ALL flat packs are designed around them.

My biggest problem with flat packs, however, is that they are designed for your average sized man. At something under 5’4″, I do not have the same musculature as the average man. This means that tightening screws and bolts to a safe degree – i.e. so the bicycle or bookshelf or table or whatever doesn’t wobble and collapse – requires enough effort to make me want to collapse! But where there’s a will there’s a way.

After struggling with the flat pack’s dinky tools for two days I finally went out and got – tah dah – a real tool!

The beauty of this lovely tool is that it will grip anything. You can adjust it to grip bolt heads [so you can tighten them]. You can even adjust it to grip allen keys so leverage takes the place of big, strong, man-sized hands! My new, favourite tool.

Even with the adjustable wrench, however, I still took another day to finish the job, but as you can see, it’s done. 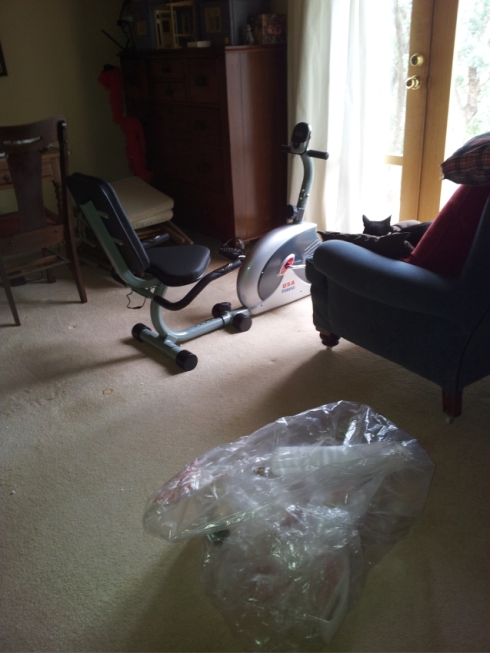 That big bag of rubbish in the foreground is bits of packaging that came with the bike. Weren’t we supposed to be reducing the rubbish we throw into landfill? I guess they didn’t get that memo.

Snark aside, I have now been using this masterpiece of flat pack engineering every second day for a few weeks, and it still doesn’t wobble! I wish I could say the same for my legs, but Rome wasn’t built in a day so I retain the hope that one day I’ll run a marathon… or maybe just sprint to the letter box and back. 😉

So ladies, don’t despair. If you’re the one cursed with putting a flat pack item together, just march down to the hardware store and invest in an adjustable wrench. Once you have one, you’ll never look back!