How to save $$ in Victoria [Australia]

This post is for Victorians on a tight budget – i.e. people on Newstart, the Age Pension, Disability Pension or young people working in the GIG economy – and concerns energy bills such as gas and electricity.

The first, critical step to saving on your energy bills is to understand that utility companies bank on us being too busy to go out and actively look for better deals. The new initiative by the Victorian government only means that energy retailers have to inform you of their best deals. But those best deals could still be very expensive when compared to the rest of the marketplace.

To give you an example, I changed my gas supplier about a year and a half ago. At the time, my new gas supplier offered the best deal according to the Victorian government’s own comparison website:

This morning, when I did a fresh comparison, my existing gas supplier was close to the bottom of the list, and their best deal was over $400 more expensive [per year] than the new ‘best deal’. As a result, I got on the phone [contact details supplied by the government website], made sure the quote was still accurate and…signed up: 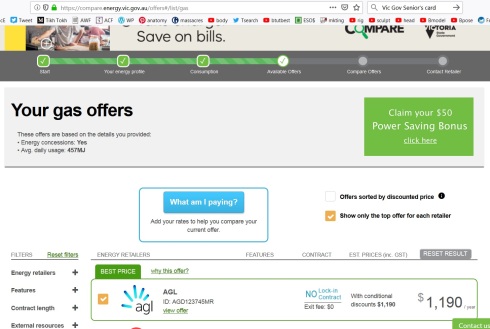 When AGL’s best is no longer the best, I’ll move my gas account again.

Gamers would recognize this as ‘churn’. The term refers to how gamers move from one ISP to another to get the best deal. I don’t ‘churn’ often, but since I became an age pensioner, I’ve learned that loyalty simply doesn’t pay. These days I ‘churn’ my gas, electricity and comms suppliers on a regular basis.

So what’s involved in comparing prices?

Once you land on the government’s comparison website, you’ll be asked a series of questions about how you use your gas [or electricity]. It pays to make your answers as accurate as possible so dig out your most recent bill and keep it handy. After you’ve completed all the relevant questions, the website will do some kind of general comparison and present you with a list of the best matches for your circumstances.

Gas pricing is a mess with about five different rates in both the ‘peak’ and ‘off peak’ categories, but don’t let it scare you. One easy thing to compare is the daily supply charge. Essentially this is the amount you pay for the privilege of having a gas connection. In other words, even if you don’t turn the gas on at all, you’ll still be charged that daily supply charge.

All retailers charge you for supply, but the amount varies. AGL’s daily supply charge is 62 cents. Another retailer I looked at [not one of the most expensive ones] was charging 83 cents. Assuming the rates don’t change for 365 days, that’s $226 vs $303 per year [or a saving of $77 per year].

When the cost of living means you have to think twice about buying that latte, a saving of $77 is nothing to be sneezed at. And when you add that small saving to the actual cost of using the energy, the savings really do add up.

So please, bookmark that government comparison website and check it out, at least once a year. Doing your homework and making a change will probably take an hour, all up, but the way I see it, I’ve just earned over $400 for that hour. Not a bad hourly rate, don’t you think?

And finally a word about keeping all your eggs in one basket. Energy retailers that supply both gas and electricity will try to convince you to move both utilities to them. Doing so may be more convenient. It may also be cheaper, sometimes. But…a cheap gas price does not automatically mean the electricity price will be the best available price as well.

Lucid Energy is running electricity turbines from the water flowing in the pipes of a city.

This provides baseload power with no emissions, and the technology can be retrofitted into any water pipe large enough.

Most drinking water pipes in most cities of the developed world can use this technology!

I just received a warning from the government website – Stay Smart Online:

It’s free to register and the warnings can save you from malicious attack. Anyway, this particular warning referred to a new email scam that was reported by the Herald Sun newspaper on the 19th of July, 2017. You can read it here:

Basically, the scammers have copied the Origin Energy bill payment email format to trick customers into clicking on fake links that will expose them to malware or worse. Sadly, this is an eventuality I predicted over a year ago when I wrote a post about this very issue:

‘What’s wrong [with email bills] is that each link is a potential opening for scammers to steal your information, especially that big, orange ‘Pay now’ button. You see, these days, the really good scammers can reproduce the Origin Energy logo, its fonts, the colours, even the text…PERFECTLY. If you were to receive one of these reproductions, you would need to look very, very carefully to pick the fake from the original. And let’s face it, how many of us scrutinise each email we receive, especially when we are expecting to receive it?’

The Origin Energy response has been to ‘teach’ customers how to spot a fake email. Not good enough. Here’s what I wrote in that same post from June last year:

‘And what do you think the big corporations are going to do about the theft of all my money? Will they pull their hair out by the roots and cry ‘mea culpa, mea culpa’? Not on your life. They’ll say that the fault was all mine. They’ll say that they warn customers about ‘scammers’ so it’s a case of ‘buyer beware’.

Having our accounts hacked is too high a price to pay for the convenience on offer. NEVER pay your Origin Energy bills via their emails. Pretend they’re just paper bills and go into your internet banking to pay them safely. Origin Energy created an opening for scammers and you didn’t have to be a psychic to know this would be the result. 😦

Australian invention for the micro-grid

“In distributed power generation, rather than having a massive centralized grid, you’re talking about much smaller micro-grids,” says Moghtaderi. “This system, in the Energy on Demand mode, has been designed for a micro-grid application. So essentially, if you deploy to a retirement village, and you hook it up to natural gas, that retirement village would be entirely independent of the national electricity network, and they can produce their own power and other utilities, 24/7.”

That quote comes from an exciting article I read in New Atlas today. Essentially, an Australian university – the University of Newcastle – and an Australian company called Infratech Industries have together developed ‘…a Chemical Looping Energy-on-Demand System (CLES)’ which not only generates electricity, but can store it as well.

CLES is the brainchild of Professor Behdad Moghtaderi of the University of Newcastle, and could well be the answer to Australia’s energy woes. Despite being a major exporter of natural gas, Australia has somehow mismanaged things so badly that now we are the ones likely to run out of power. It’s happened already in South Australia and is likely to happen in other states as well in the near future.

Tesla has offered to create a battery-powered fail-safe for us before next summer, but I’d much rather see Australia embrace a homegrown product, especially as it could lead to a rapid uptake of distributed power generation. If we get that right, we could export the technology to the rest of the world instead of continuing to rely on the export of resources. We have so much inventive talent here, let’s celebrate if for once instead of forcing it off-shore through lack of interest.

You can find the New Atlas article here:

And now an apology. I’ve been missing in action a bit lately, and it’s due to a number of things. First, my teaching schedule exploded unexpectedly. Second, I’ve been trying to complete the print version of Innerscape, and that has required upgrading some of my most critical software to ensure that the finished product is commercially ‘legal’. [For ebooks I use Storybox, which is fine, but for print I have to use a commercial version of Word, and I only had a ‘Home and Student’ version before]. Finally, I haven’t been well. Since about June last year, I’ve had recurring infections in my teeth which have resulted in having one tooth pulled and root canal treatments on three others.

Despite all the treatments, and the associated cost, I developed another infection last week, and I now have to go see an endodontist. Endodontists are dentists who specialise in root canal treatments [amongst other things]. My first appointment is next week. Until then I’m on antibiotics that hurt my stomach and anti-inflammatories that also hurt my stomach. Not sleeping very well either so…those creative juices just aren’t flowing. I will try to catch up with your creativeness though. 🙂

Baseload is a word that’s bandied around a lot when proponents of fossil fuel energy plants talk about green energy. Essentially, the argument states that modern, technological states require reliable energy to thrive. This, they say, cannot be provided by green energy sources such as solar and wind because neither is available all the time.

There is some truth to that argument, and until reliable green energy storage becomes available – e.g. massive batteries of some kind – we will need some form of regular energy production. But…that regular energy production need not be from coal or nuclear. Geothermal has been around for a while but while it’s reliable, it isn’t necessarily cheap. This is where wave power could provide the magic bullet that finally weans us away from fossil fuels.

Wave power technology harnesses the constant rise and fall of ocean waves to turn the generators that actually create the energy we need. The technology is not free, but once in place, the driving force behind it is. Better still, that driving force – ocean waves – is constant. Some days may see more energy generation than others, but the waves never completely stop. And that’s important because that minimum level of power generation can be calculated and used.

The new wavepower plant built in Gibraltar [read the Gizmag article for full details] may be small, but it’s cost effective now and can be added to in the future. 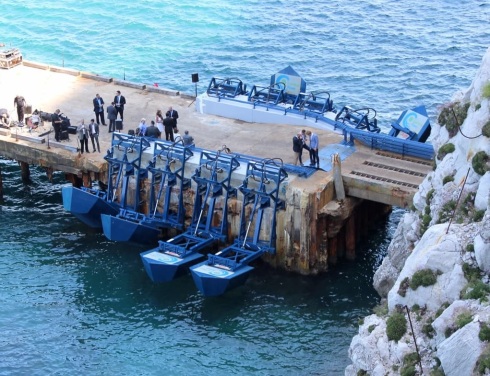 Congratulations to Gibraltar for taking a small step towards greening the planet. Hopefully one day, all countries with access to an ocean will harness wavepower for their own energy needs.