Do you re-read old favourites?

My thanks to Audrey Driscoll for her post about re-reading The Lord of the Rings and the magnificent song that went with it:

I have re-read The Lord of the Rings, about three times. I’ve also re-read the entire Dune series about eight times and the Death Gate cycle at least three times, the most recent being just a couple of years ago. But… I’ve never re-read any of the books on my Kindle.

Is that because there are so many new books available to read?

In her hugely successful blog posts about the TBR [To Be Read] list, D. Wallace Peach brought a touch of humour to the phenomenon of buying and downloading hundreds of books that people never end up reading. I didn’t contribute because I don’t actually have a TBR. I’m a voracious reader and get seriously anxious if I don’t have something new lined up to read, but now I have to wonder: why does my reading have to be ‘new’? Why don’t I re-read any of the books on my Kindle when I do re-read at least some of my paperbacks?

I know the answer doesn’t lie in the quality of books on my Kindle; a lot of them are as good as The Lord of the Rings, Dune, or any of my other favourite paperbacks. The answer can’t be readability either because my eyesight is not great any more so paperbacks are actually harder for me to read. So what is it?

I have no answers on this one so I’ll throw the question out to all of you:

Do you re-read books and if so, are they print books or ebooks?

The City of Bones by Martha Wells

When asked, I’ve always said I prefer science fiction to fantasy because of the possibility, however remote, that some part of the story might be true. Or become true. Some day. Yet if I’m honest with myself, I have to admit that I do love sci-fan as well.

To me, sci-fan is pragmatic fantasy in which the real and the unreal blend seamlessly to create impossible worlds that we nevertheless accept as possible. Dune, by Frank Herbert is probably the best known example of sci-fan, closely followed by Tad Williams’ Otherland. And then there’s Robin Hobb’s Farseer saga. It’s more fantasy than science, and yet the life-cycle of the dragons is no more unbelievable than the metamorphosis of caterpillars into butterflies.

Well now I have a new sci-fan author to add to my pantheon – Martha Wells.

In The City of Bones, Wells tells the story of a young Krismen called Khat. He’s part of a species that was biologically engineered to survive in the Wastes after the land burned and the seas boiled away. But there are human survivors of the destruction as well, and the two species exist in an uneasy alliance against the deadly creatures of the Wastes.

Khat lives in Charisat, a human city, making a precarious living as a relic trader. Relic traders are like a combination of archeologist/palentologist/anthropologist, with a bit of a conman/thief added in, and relics are fragments from the lost world of the Ancients.

That would have been more than enough to grab my attention, but Wells weaves in history, politics, conspiracy, intrigue and a bit of classic who-dunnit to make the story an absolute page-turner. I loved it.

If you like sci-fan too then I strongly recommend The City of Bones. 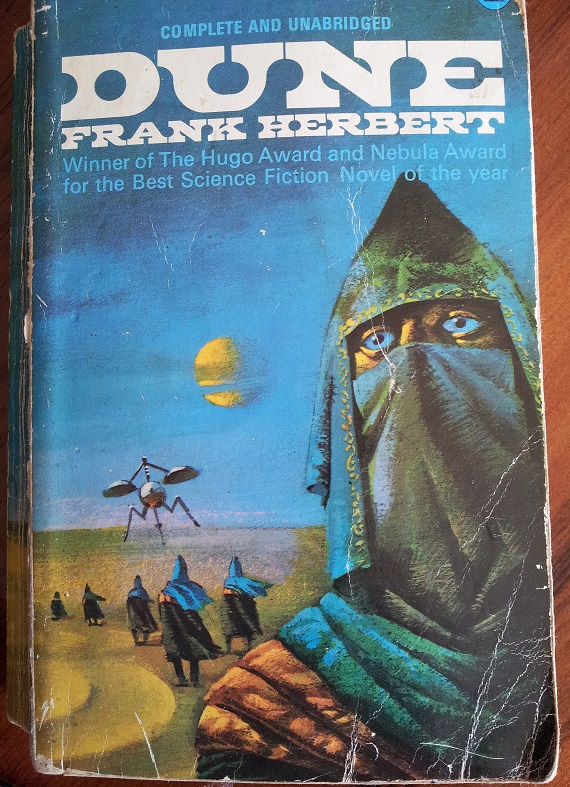 Happy Birthday Arrakis! And apologies for the huge picture. It’s a photo of the front cover of my copy of Dune, and I wanted you to see the loving wear and tear on this precious, 1975 version.

I first read Dune in 1971 or ’72, when I borrowed it from a university friend, but as you can see, I have re-read it many times since. Not only is story just as compelling as it was all those years ago, it also brings to light something new with each re-reading. I guess it’s time to re-read Dune again because I was not consciously aware of its environmental credentials. Oh I knew and loved the whole desert environment and the small scale terraforming the inhabitants were attempting, but it was not until I read this commemorative article in Flavourwire this morning that I realised Dune’s connection to Silent Spring:

I highly recommend reading the article as it points out some rather interesting facts, facts I have never known, such as:

Published just three years after Silent Spring in 1965, Dune has been re-printed many times. It has also spawned more than one movie version, all of which have kept the level of public awareness ticking along for 50 years. In fact, I personally know of one, highly popular group on Goodreads that is dedicated to discussions about Dune.

Nevertheless, I believe Dune’s greatest contribution to environmental awareness has come about indirectly, via the novels and movies that owe some part of their creation to the concepts popularized by Frank Herbert’s master work.

Novels have power. Great novels change the world. I wish Frank Herbert were still around to see the fruits of his labours. Or maybe not. I fear he might be disappointed.

I had a nice little post drafted last night. It was going to be about the craft of writing but when I awoke this morning I found that my subconscious had been busy on a related subject – critiquing. Now critiquing is a subject I know very little about but what I do know has me worried, worried enough to throw my draft out the window.

This all started when I stumbled across a website called Bookcounty. This site gives writers the opportunity to have their work critiqued in exchange for critiquing the work of others. In essence critiquing is like giving feedback on technical issues such as ‘pace’ and ‘voice’ and is said to be invaluable for all writers but most especially for new ones.

So why am I worried? Because I began reading the first ten chapters of a book called ‘Pathfinder : Lost’ on Bookcountry and found it to be wonderful. Confused? Read on. Pathfinder is a story with the scope and depth of ‘Dune’ written in flowing, clean prose [bar the odd typo] with characters so real they almost jump off the page.  It is the kind of science fiction I love to read and most definitely the kind that I would love to write, yet it was given only 3.5 stars. How could this be right? And on a personal, selfish note, what chance did my own much poorer writing have if this story was only ‘average’?

I was shaken, I have to admit it. Very shaken. And so I set out to discover why a story I considered to be so very good had been canned by other critiquers. Yes I know I just made up a word but it’s very early in the morning and I haven’t had my second hit of caffeine yet so be gentle.

I found 10 reviews/critiques and began reading. Most echoed my reactions but one, by another writer who clearly felt himself to be an authority on the subject, was harsh. As I read through this critique my eyebrows kept going up and up as I tried to reconcile what he was saying with the story I had just read. Some of the criticisms were against features of the writing  that I most liked while others implied that the author of Pathfinder – Hudson MacHeath – did not know the first thing about the craft of writing.

By this stage I was bristling like a porcupine bailed up by a pack of savage chihuahuas. And then I found it, the clue that put the whole critique into perspective. It was hidden in the words  ‘we writers’. These select, elite few clearly included the reviewer but did not include the neophyte Hudson MacHeath. Ah hah…

Now to be fair to this ‘we writers’ twerp, the version of Pathfinder I read is not the one he first reviewed close to a year ago – this version apparently includes some restructuring and editing. Nonetheless I find it hard to believe that the story is fundamentally different to the original because the prose is just too good, too mature.   So I am left with the conclusion that the ‘we writers’ person either did not know what he was talking about or was a jealous prick. I very much suspect he was and probably still is the latter.

Most of the writers I have met online in the last four months have been good people who are supportive of each other and critique gently but the digital world also has an underbelly from which dark and slimy things can emerge. Professional jealousy, self-importance and its mirror image, low-self esteem are human traits but that is no excuse – they are still dark and slimy and when they are validated by the word ‘critique’ they can lead to a very nasty form of intellectual bullying.

A real critique is objective and is motivated by a genuine desire to help polish someone else’s work. It is an act of generosity. Intellectual bullying however is simply a way of making yourself look good at the expense of someone else. This ‘we writers’ person did not succeed in disheartening Hudson MacHeath but with a more fragile writer he could well have done so. And yes, I am thinking of myself here.  I know I need to develop the hide of a rhinoceros when it comes to my writing but I am nowhere near that level of self confidence yet, so had I been on the receiving end of that critique I know I would have been devastated, perhaps to the point of giving up entirely. I’m not a coward but I do take criticism seriously so I will think long and hard about ever submitting my work to Bookcountry.

Who am I kidding? I will never submit my work to people like ‘we writers’! Editors, especially good ones, are not cheap but they are worth every cent they charge because they know what they are talking about and are not likely to put writers down just to stroke their own egos. This is one benefit to having a professional editor that no-one seems to mention yet in some ways it is the most important reason of all. Critiquing groups cost nothing but as the saying goes ‘you get what you pay for’. Phew… I am so glad I discovered this.

My thanks to all those who have given me the benefit of the doubt on this post – I really did need to work through this issue and sometimes writing is the only way I can clarify things for myself. As for ‘we writers’,  all I can say is ‘take your ego and put it where the sun don’t shine’. To Hudson MacHeath I’d like to say ‘please finish your wonderful book because I want to find out what happens!’