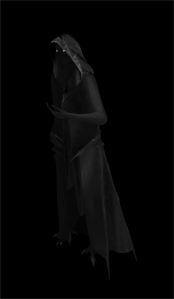 As a reader, one problem I’ve always had with plot driven stories is that the motivation behind pivotal events is often paper thin. The author wants Character X to do something or be somewhere because the rest of the plot depends on it. A flimsy excuse is offered, and the story moves on, usually without me. I’m fussy, no apologies.

Well, imagine my dismay when I found that I was in precisely the same situation with book two of Vokhtah. 😦

I’m a pantster by nature, meaning I don’t like to outline, but the second book of a series inevitably constrains how freely you can write because much of the world building and ‘rules’ have been set in concrete as part of book one. You can’t suddenly unwrite details that are no longer convenient.

And that’s the problem I’ve been tiptoeing around for weeks. I have a character who calls itself Death*. It appears in book one as the assistant to the Yellow. In book two, however, I need Death to be at the entrance to the Settlement when Kaati** arrives. The trouble is, for higher level Messengers*** like Death, gate duty would be seen as a dreadful punishment.  I’m talking maximum humiliation here.

So what could Death possibly do that would result in such a public punishment?

I already had some of Death’s back story and the world building from book one, but the ‘crime’ and its motivation eluded me. I tried to fudge it, but my subconscious wouldn’t let me. Every time I sat down to continue the story, I’d find myself going over that scene, again and again and again. Yet no matter how much I polished the words, it still felt like a bloody fudge so last night I spat the dummy and decided to delete the whole scene and start from scratch.

Oddly enough, I had a great night’s sleep, and this morning I started writing the outline, yes the outline, with a clear head. Two thousand words later, I finally have all the background and world building needed to explain Death’s motivation for being where it needs to be. Yes! 😀

I won’t spoil the story by giving it all away, but I will explain some of the world building that emerged. It revolves around the Guild of Healers and how their Council works. In a nutshell, the Council is made up of a total of seven Councillors who are the most powerful Healers in the Guild.

But Councillors are not chosen solely on merit. When a Councillor dies, or disappears [as happened with the leader of the Blue faction****], a replacement is usually chosen by a vote amongst the remaining six Councillors.

And finally there’s the Green. It has no faction of its own and its purpose is to break any deadlock between the two major factions. In the past, Councillors chosen as the Green tended to be strictly neutral. In book one, however, the current Green tends to side with the Yellows more often than the Blues. In book two, it continues to side with the Yellows until Death does something that really ticks it off.

If the Green lends its vote to the Blue faction it will cause a deadlock in the selection of the seventh Councillor – i.e. three Yellow faction members versus two Blues plus the Green.

In situations where the Council is deadlocked, the vote must be thrown open to the entire Guild. If that were to happen, the Yellows might still manage to get another Yellow voted onto the Council, but it would not be a certainty, and the delay could seriously disrupt the Yellow’s plans [the Yellow is the leader of the Yellow faction].

I can’t tell you what Death did, but it works perfectly with the Machiavellian politics of the Guild and its own, personal motivation. At this point I have no idea how much of this world building/back story will end up in the actual book, but at least I’ve stopped fighting my ‘muse’, and we’re both happy for the first time in weeks!

The sun is shining, the wind is mild and my Sunday is turning out to be a really good day. Hope you enjoy your weekend as well.

* Both Vokh and iVokh keep their personal names secret, and in public are known solely by rank or profession.

** Kaati is the young Apprentice from book one. Book two follows what happens to Kaati after parting company with the Blue/Messenger at Needlepoint gather.

*** Messengers are Healers who act as ‘enforcers’ for the will of the Guild of Healers. They are distinguished from ordinary Healers by their ability to inflict pain without suffering any of the empathic consequences that affect true Healers.

**** The leader of the Blue faction was known as the Blue. This powerful Healer left the safety of the Settlement to stop the guild from shooting itself in the foot. See book one, Voktah.