Katy Faust is the daughter of a lesbian couple and the owner of a website called ‘askthebigot.com’. When asked, she says she is against gay marriage because of the effect it would have on the children of such marriages. She is currently in Australia thanks to the ABC.

If you saw the Tony Jones’ interview with Katy Faust recently, you might remember the bit where he asks her why she ‘came out’ [originally, ‘askthebigot.com’ was anonymous]. Apparently the reason was because a gay blogger had discovered her identity and ‘outed’ her. 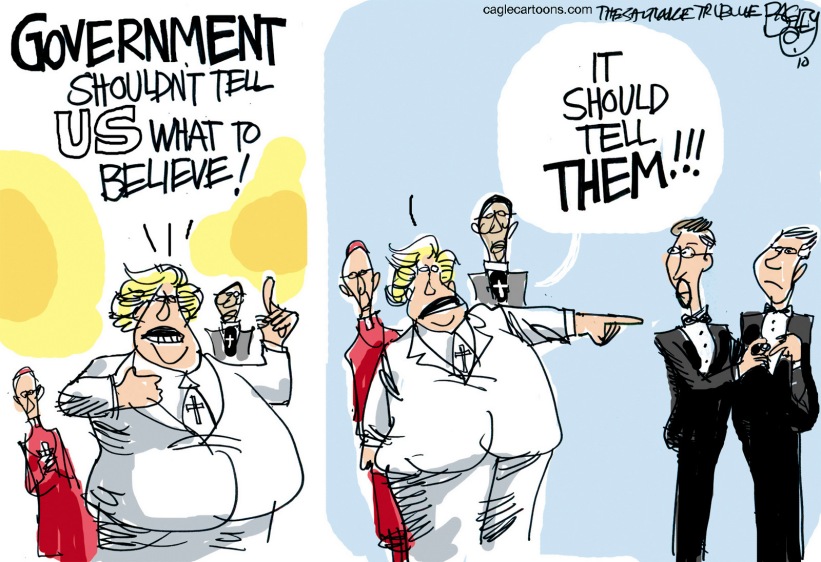 It’s not every day that one gets blamed on national television for subjecting an entire country to veiled bigotry. Apparently the reason Mrs. Faust got on an aeroplane and flew to the other end of the world to continue promoting bigotry was that I outed her identity (not that she makes money off of it.) Otherwise, of course, she’d only be promoting bigotry from the privacy of her Seattle home, her husband’s church or the nearest Starbucks.

There are a few things the people of Australia should be asking themselves about her, the first of which is who paid her airfare? Despite Katy’s softly-softly approach where she pretends to be a sweet and slightly naive housewife, her business project has always been to use homophobia for profit. You have to keep in mind that people don’t buy a domain name called Askthebigot.com, engage an editor and write clickbait articles because they’ve got a bit of free time between dropping the children off at school and marinating chicken for lunch.

Faust is actually an astute businesswoman. According to the bio she gave epicquestmedia she studied Asian Studies and Political Science at St. Olaf College and received a Fulbright to study in Taiwan. That belies the notion that she would be capable of making such simplistic and illogical statements unless there’s something more to the story.

The fraud Mrs. Faust is promoting in Australia today is one where she conflates the issues of gay marriage and gay parenting in a rather absurd manner. Mrs. Faust herself was born to a lesbian mother long before the lgbt community considered marriage would ever become a legal possibility.

The vast majority of gay parents are in fact unmarried lesbians with children from previous heterosexual relationships, children just like Katy Faust herself . The link is to a Spanish study, but the figures seem to reflect those in other countries as well. Same-sex marriage legislation has been approved in various countries including Spain, Holland and Belgium, and there has been no significant rise in the number of lgbt families with children.

That means the existence of these families is entirely independent to their legal status as families. So Faust’s argument is dead in the water.

Where gay marriage is relevant to the children of members of the LGBT community is simply that they would afford those pre-existing families a number of rights and protections, including financial/legal protections in the case of separation and divorce. Access to the children, visitation, child-support and so forth.

So if her propositions don’t actually protect children, the inexistence of gay marriage certainly didn’t affect her own childhood story– then we’re back to the money angle. Homophobia is big business in America.  In 2010 NOM raised US$9,197,742. In the first year of its creation NOM paid its leaders, Brian Brown and Maggie Gallagher, 14% of its budget. Now NOM pays Brown a salary of over $150,000 per year, and all he has to do is hate gay people and promote anti-gay propaganda. Fabulous job! Faust and her cohorts, Rivka Edelman, Robert Oscar Lopez, Janna Anderson and others want a piece of that ugly-hate-pie.

Little by little they’ve been raising their public profiles. Faust with her website, Lopez with amateur videos, Darnelle-Anderson with articles– and all of them together with a number of amicus briefs. They’ve realized filing briefs with various courts creates the false impression of legitimacy and seriousness. In fact the ink was still wet on Mrs. Faust’s brief and her pastor husband was already calling her an expert on the issue:

“My wife is an expert on this. I know what the Bible says, but from a logic / experience standpoint she is the expert. She has written an “amicus brief” for the upcoming Supreme Court Case on gay marriage next week.”

Let me just clarify that “An amicus curiae (literally, friend of the court; plural, amici curiae) is someone who is not a party to a case and offers information that bears on the case, but who has not been solicited by any of the parties to assist a court.”

If you dislike the colour purple you can submit an amicus brief in any case where the colour purple is the subject of the suit. Maybe purple stole your candy, maybe purple dumped you. You could even be colour-blind, it doesn’t matter. Your argument doesn’t have to have any merit whatsoever, you just need to have an opinion/experience related to the suit. If Faust is an expert on something, it’s in promoting and endorsing vile stereotypes that have long been dismissed by mainstream science and civilized society at large.

Hopefully Australia and its people will see through the scam. Hopefully you will join Argentina, Belgium, Brazil, Canada, Denmark, France, Iceland, Ireland, Luxembourg, the Netherlands, New Zealand, Norway, Portugal, South Africa, Spain, Sweden, the United Kingdom, the United States and Uruguay in saying no to bigotry and saying no to Faust and the anti-gay-for-pay crowd.

And just in case it was not blindingly obvious, I agree with every word. I can only hope that the ABC embraced Ms Faust in the hope of stirring up a nice little controversy, not in ignorance.