I make no apologies – I’m well and truly in holiday mode, and playing games is very much a part of the equation for me. I play Final Fantasy xiv, of course, and Spider Solitaire, but my latest craze is the Balloon Pop game that’s part of the Jacquie Lawson Circus.

Rather than trying to describe the Circus, feast your eyes on these screenshots: 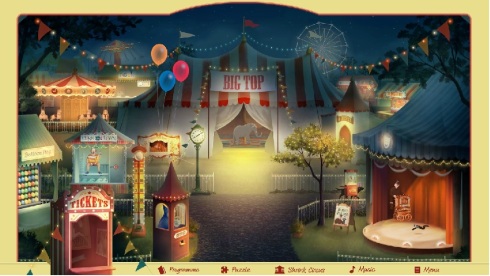 Like the Advent Calendar, you unlock the various parts of the Circus by ‘buying’ tickets. Unlike the calendar, however, you can unlock all the tickets in one hit if you wish. I’ve unlocked almost all of the tickets so there are little animations all over the place, including that clock in the mid-ground. It always displays my real world time. It’s a very nice touch which makes the scene look and feel strangely real. From memory, the Balloon Pop game is the third ticket in the sequence.

The aim of the Balloon Pop game is to pop as many balloons as possible, but the minimum is three. This is what it looks like at the start: 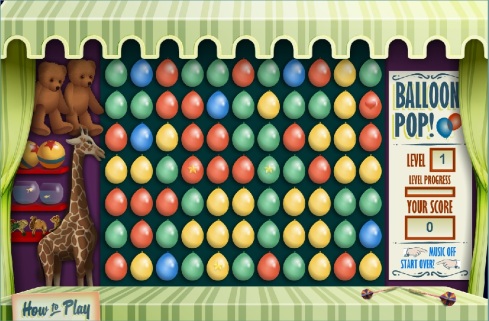 There are ten levels, and the game speeds up as you progress. You also get wildcard balloons – in the shape of diamonds and crowns – that make big bangs, and give your score a big boost.

I’m pleased to say that, unlike the game in the Advent Calendar, this one I can win! mwahahahaha… -cough-

For my next post I’ll try for something a little more grownup, maybe. 🙂

When I was a kid, you could buy Advent Calendars that counted down each day of December until you reached Christmas. The delightful part, however, was that behind each ‘day’ on the calendar was a small chocolate. I can’t remember the taste of the chocolate, but I can remember the sense of anticipation that went with each one.

Can you still buy those Advent Calendars? No idea, but this year I have another reason to look forward to Christmas, and it’s far kinder to my waistline! A dear friend gave me a digital Advent Calendar, and I literally start each day looking to see what new delight will be revealed.

As I received the Edwardian Advent Calendar at the end of November, I was only allowed to visit the Pavillion, a cosy room that looks like this :

The two dogs, and the two small kittens on the chaise, are animated. Each time you do something in the Pavillion they run through a series of very cute little routines. So far I’ve only seen one routine repeated!

But the Pavillion provides more than just a seemingly never-ending series of animations. All the jigsaw and box puzzles can be played, as can this game : 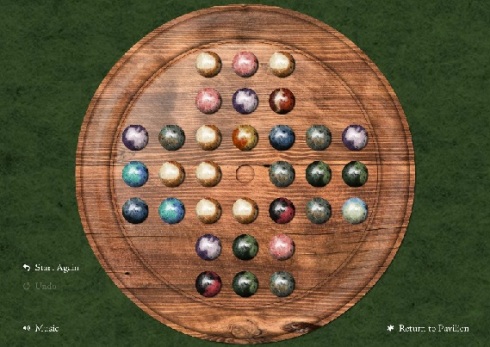 And then, finally, December 1 arrives and you get to explore the Edwardian part of the calendar. For those unfamiliar with the Edwardian period in England, it was a time of gracious living [for the well-to-do] in beautiful mansions with a small army of servants to cook, clean and generally make life easy.

Each day, the Advent Calendar provides a sneak peak into this period via simple but very effective animations. Sometimes this sneak peak is interactive. For example, on Day 3 you get to do flower arranging. You are provided with six different ‘vases’ and masses of period flowers and greenery to arrange as you will. 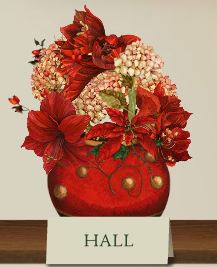 All the controls are simple point and click affairs, very easy to do, yet the programming behind them is powerful. Every flower can be resized, flipped and rotated, allowing you to create some very unique ‘arrangements’.

Once you’re done you’re prompted to select the room of the mansion in which to display your creations.

The flower arrangement on the left is the first one I created, and as you can see, it is destined for the ‘hall’.

To my huge surprise, my creation actually became a part of the ‘scene’ :

Can you see it?

I can’t remember the last time I’ve had so much fun. Not only is the concept brilliant, the execution is superb. Everything from the animations to the interactive games and music are just perfect.

I know I’m sounding like an info-mercial but … if you want to send someone a digital gift for Christmas, this just has to be it!

That little animation was one of The Daughter’s early ones, but as she has posted it on youtube I feel justified in sharing it with you. Can you tell that we have the same, slightly macabre sense of humour?

I think The Daughter is immensely talented, and of course, being a very proud Mama, I’m giving her new website a free plug!

If there are any game developers reading my blog – The Daughter is graduating in a week and job offers are gratefully accepted. 😉