Drought is nothing new in Australia. Dorothea McKellar wrote about it in My Country, a poem that I, and all Australians of my generation, learned off by heart in school:

I love a sunburnt country,
A land of sweeping plains,
Of ragged mountain ranges,
Of droughts and flooding rains.

But last night I saw something that truly shocked me. It was an aerial view of the reservoir of a small town in NSW. The reservoir was half empty, and the water was an unpleasant green.

But that was not what shocked me. 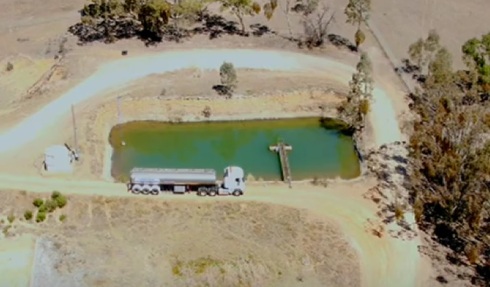 But that was not what shocked me.

What shocked me was the realisation that much of the precious water going into the reservoir would soon begin to evaporate. Even as it was being pumped in, it was starting to evaporate out. And all of Australia’s dams and reservoirs are like that – open to the air, the wind, the sun and the heat. Water wasted by the gigalitre.

Open reservoirs were the only way water could be stored in the past. But it doesn’t have to be like that. It would take money, a terrifying amount of money, and a political will that has not been seen since World War II, but those outdated, primitive reservoirs could be updated into underground water storage units.

We could also stop giving away the life blood of our rivers to mates with deep pockets. Our food security relies on irrigation. The water for that irrigation comes from our river systems. But instead of protecting those river systems, we’ve allowed them to be plundered for cash crops like cotton:

Part of why cotton takes up so many nutrients from the soil is its extensive root system. In order for the roots to develop enough to obtain those nutrients, lots of moisture is needed, especially early on.

Could someone explain to me why cotton is being grown [by huge agribusinesses] in an arid country like Australia? Without massive irrigation, taken largely from our rivers and flood plain harvesting, cotton could not possibly survive in inland Australia. Yet it’s happening, and it’s generating huge profits for multinational businesses such as CS Agriculture Pty Ltd:

“….(which owns Cubbie Station) in Australia. Shandong Ruyi is the ultimate shareholder of this new Australian group…”

“Since CS Agriculture took control of Cubbie Station, the struggling cotton property has been transformed by a major reinvestment into the business, including upgrades of water-saving infrastructure…”

The ‘water-saving infrastructure’ includes massive damns that harvest flood plain water. I should also point out that Shandong Ruyi is a huge Chinese textile company:

Australia needs foreign investment, but as one of the most arid countries on Earth, exporting cotton via Shandong Ruyi is akin to exporting our water. In my not-so-humble opinion, that is insane. Allowing this to continue when said export is destroying land and communities in the rest of Australia is…criminal.

Every Australian needs to understand that the flood plains of a river are vitally important to the river and the land, both above and below:

‘The layered sediments of many flood plains can create important aquifers. Clay, sand, and gravel filter water as it seeps downward.’

When you harvest the water of a flood plain, you starve the river and the land. You also starve the towns that historically relied on that river for their water. One such town is Broken Hill.

Broken Hill is not some small country town with a pub and not much else. Broken Hill is a major inland centre, and it too is running out of water. It used to supplement its water from the Darling river, but the Darling is almost dead so a ‘hurry-hurry’ pipeline is being built to the Murray river:

“The Wentworth-Broken Hill pipeline will fix things for Broken Hill, which can no longer rely on the Darling for its water supply. It will also ensure secure water supply for two new mines, Perilya Mines and Hawsons Iron Project.”

The biggest problem with the Broken Hill pipeline, however, is that the water it takes from the Murray will impact all the communities south from there, in Victoria. Victorian communities rely on the Murray too, as does South Australia. Allowing the Darling to be destroyed up north in Queensland and northern NSW will have a knock-on effect all the way down the line, with each ‘fix’ creating problems further south.

There is one ‘fix’ I haven’t mentioned yet, and that’s desalination. We built a desalination plant here in Victoria, after the Millennium Drought. That desal plant may stop Melbourne from running dry, but what of the inland?

All of Australia’s water problems are of our own making, and could be fixed properly, but it would take serious nation building by a succession of Federal governments. It hasn’t happened.

Now ask yourself this: if we can’t fix the problems we created, what are we going to do when climate change truly starts to bite?

Sadly, the answer to that question appears to be ‘nothing’. Successive governments have sat on their hands, denying that we’re destroying the rivers, denying that climate is changing, denying that anything needs to be done. And we, the voting public have allowed them to get away with it because we’re scared our cushy lifestyles will become a little less cushy.

I truly hope I’m no longer around when life stops being ‘cushy’ and becomes a fight for survival.

I am the kind of person who always has to know why things are the way they are so my interests range from genetics and biology to politics and what makes people tick. For fun I play online mmorpgs, read, listen to a music, dance when I get the chance and landscape my rather large block. Work is writing. When a story I am working on is going well I'm on cloud nine. On bad days I go out and dig big holes... END_OF_DOCUMENT_TOKEN_TO_BE_REPLACED
This entry was posted on Tuesday, October 1st, 2019 at 10:50 am and tagged with Australia, Broken-Hill-pipeline, climate-change, cotton, Cubbie-Station, drought, evaporation, Federal-Government, infrastructure, nation-building, rivers, storage, underground, water and posted in Australia, Climate Change, My soap box. You can follow any responses to this entry through the RSS 2.0 feed.
« Cats :)
A different kind of jigsaw puzzle »