There are a lot of excellent video tutorials out there, but…none of them allow you watch in slow motion. That means you have to stop, rewind, play, rinse and repeat, until you see that one, teeny thing that a beginner doesn’t know and the presenter takes for granted.

As an absolute beginner myself, I’m writing this series of posts to save other absolute beginners from the hours of frustration and research that went into learning the teeny things everyone else takes for granted. Each post will be step-by-step with screenshots, and I welcome comments that point out things I’ve missed or taken for granted. So, let’s begin!

Translation: Blender 2.8 is a free app that produces models of ‘things’ that can be viewed from all angles – i.e. in 3D.

As with all software downloaded from the internet, you should save the file to your computer and scan it with your anti-virus software before installing it.

Once Blender 2.8 is installed, this is what you will see:

The colourful bit in the middle is like a temporary shortcut menu. Common functions are on the left, and recently used files are on the right. Left click on the dark grey grid in the background to make it disappear.

You will now be looking at the Layout workspace. It contains all the tools and options you will need to create and edit a 3D model. As a beginner, this is where you will spend most of your time.

Before starting to explore the workspace, however, I need to address the elephant in the room – Blender keyboard shortcuts.

Most software programs allow the use of keyboard shortcuts – e.g. Ctrl C for Copy and Ctrl V for Paste [in Microsoft Office programs] – but these shortcuts are an added extra for those who already know the software and want to work faster. In Blender, this process is reversed – i.e. shortcuts first and menus second.

Even as recently as Blender version 2.79, the menus were all over the place, and learning how to find functions in them required as much memory as learning how to use the shortcuts themselves. I started with 2.79. It was hard, very hard.

Enter Blender 2.8. The core functions remain the same, but the interface and the menu system have been rationalized from the ground up, making the learning process much easier. Navigation functions are grouped together as are the creating and editing functions you will use the most. Better still, when you can’t find/remember a less used function, there is a fairly logical and consistent way of finding it. And finally, if all else fails, you can press F3 on the keyboard and search for the function by name.

I had to smile as I wrote about F3. Search is a core function in any software, yet even in 2.8, it’s accessed by a keyboard shortcut and requires you to remember which key it is hidden behind! Blender 2.8 may have emancipated the menu, but shortcuts are still more…equal. 🙂

Irony aside, there is a compelling reason why the experts use the Blender shortcuts; they’d go insane selecting millions of small, repetitive functions from the menus! And you will too.

To give you a simple example, you can use this navigation key to zoom in and out of your model:

Or you could simply use the scroll wheel on the mouse to zoom in and out.

So which keyboard shortcuts should you learn off by heart?

Opinions will differ, but I found the navigation ones a must:

Zoom in and out

Move the scroll wheel on the mouse to zoom in or out.

Free move around the scene

Move the object in the scene

Move the object in just one direction

To understand this shortcut, imagine that you have positioned an object in just the right place and you don’t want to accidentally mess it up. But…it could do with being just a tiny bit higher [or lower or left or right or backwards or forwards]. How do you make that small adjustment without messing it all up?

The answer is by constraining [locking] movement to either the X, Y or Z axis: 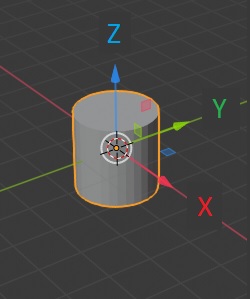 Unlike the graphs you probably learnt as a child, in 3D, up and down is known as the ‘Z’ axis. In Blender, the Z axis is shown in blue, the X in red and the Y in green. The orientation of ‘X’ and ‘Y’ will depend upon how you are viewing the object. In the example shown below, I want to move the object to the right: 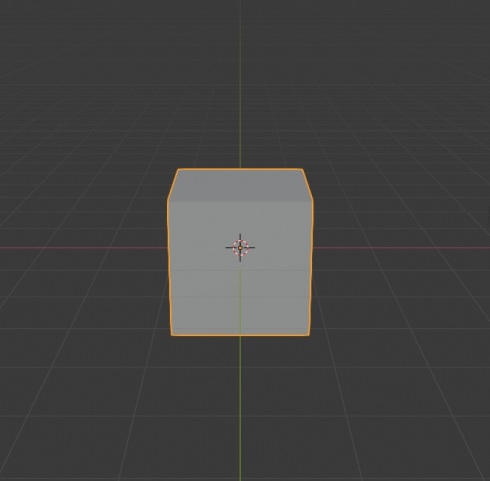 As you can see from the screenshot, left and right are on the X axis [the red line on the grid]. To move the object precisely to the right:

If you want to move the object up or down, the shortcut is ‘G’ and ‘Z’. In the screenshot above, moving the object backwards and forwards would be ‘G’ and ‘Y’.

If you want to use the menus you will have to start by opening the toolbar on the left. To do this, point the mouse at the right edge of the toolbar. When the mouse pointer changes to a double headed white arrow, click-hold-and-drag to the right:

Keep dragging until the toolbar is open and shows the label for each icon. Click the ‘Move’ option as shown:

I admit I found the whole  X,Y and Z spatial awareness thing a bit hard at first but, as with most things, the more I had to move objects around, the easier it all became. And as I learned more advanced processes, I realised that X, Y and Z are absolutely fundamental to using Blender. I suspect they’re fundamental to learning any 3D software.

Ultimately, you will learn the shortcuts that make your life and work easier. For me, one shortcut I simply couldn’t live without is Ctrl Z. It’s standard for ‘Undo’ and will save you millions of clicks as you work in Blender.

Hold the Ctrl key down while you press the letter Z. This will undo the last thing you did. You can repeat Ctrl Z up to about 30 times, or until you run out of steps to undo.

Alternately, you can click ‘Undo’ on the Edit menu [top left of the screen]:

I’ll finish this first post off with a beginners tutorial that was quite good. It takes you through the basics of navigating the viewport using both the navigation icons and the keyboard shortcuts that go with them. The ‘viewport’ is just the name given to the dark grey grid.

Whether you use the menus or the shortcut keys, I hope you have fun and enjoy the learning process.

I am the kind of person who always has to know why things are the way they are so my interests range from genetics and biology to politics and what makes people tick. For fun I play online mmorpgs, read, listen to a music, dance when I get the chance and landscape my rather large block. Work is writing. When a story I am working on is going well I'm on cloud nine. On bad days I go out and dig big holes... END_OF_DOCUMENT_TOKEN_TO_BE_REPLACED
This entry was posted on Saturday, August 31st, 2019 at 4:38 pm and tagged with 2.8, 3D, beginners, Blender, guide, keyboard-shortcuts, navigation, screenshots, software, step-by-step, X, Y, Z and posted in Blender 2.8, how-to, How-to guides. You can follow any responses to this entry through the RSS 2.0 feed.
« Posing…with attitude. :D
How to unblock a toilet…with a mop »