The Offspring and I are trying to reduce the amount of meat in our diet and have discovered some sensational vegetarian dishes. Rice croquettes [or Arancini here] are one such delectable dish: 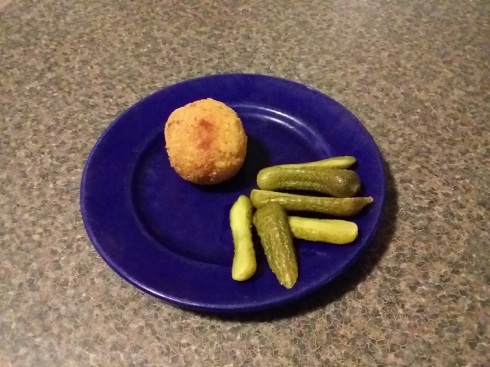 This one, lonely croquette is the only one of the 18 that survived for the photo. The rest were wolfed down. 🙂 To give you some idea of size, that’s a bread-and-butter plate with sliced sweet and sour pickled cucumber on the side.

The dish we actually ate was served with raw julienned carrots, pickles and a dipping sauce made from one, beautifully ripe avocado, mashed, and mixed with about two tablespoons of Jalna Greek yoghurt. Thisyoghurt is pot set, creamy and absolutely plain. Beautiful stuff. 🙂

Oh, I forgot, inside each croquette there was one of these:

These are baby Bocconcini – small mozzarella balls around which the rice croquette mixture is formed. In hindsight, getting the very small ones may have been a bit of a mistake as the flavour was a little lost amidst the rice, but still, very moorish. 🙂

I found the recipe for the rice croquettes in an old, slightly battered cookbook that I picked up from an op. shop many years ago. The book is called ‘The Italian Cookbook’ and was written by Maria Luisa Taglienti, copyright 1955. I haven’t cooked many of the recipes, but each one I did try worked beautifully. So here’s my version of rice croquettes. 🙂

2 cups of rice [I usually cook with long grain rice but bought arborio rice just for this recipe. It was worth it]

3 tablespoons ready-cooked tomato sauce [I wasn’t sure what she meant by tomato sauce so I used I sacchet of Leggos tomato paste. The flavour of the rice was delicious]

1 cup diced bel paese or soft white cream cheese [I didn’t know what Bel Paese cheese was so looked it up and found it could be used as a substitute for mozzarella, so I bought the Bocconcini. Next time I may try a cream cheese instead]

2 cups of olive oil [I don’t like deep frying so I only used just under 1 cup and substituted peanut oil for olive oil as it is excellent for frying].

I thought I might have to cook the rice like a risotto with the tomato sauce, but you boil it in salted water instead [approximately 15 minutes].

Next, you have to drain the rice and allow it to cool completely. I made two mistakes here. First, I rinsed the rice instead of just draining it. I think it would have been easier to form the croquettes if I’d left the starch on the grains of rice [to make them stick together better]. The second mistake was that I didn’t leave enough time for the rice to cool. It took well over an hour at room temperature, so dinner was a bit later than usual. Next time I make these croquettes, I’ll boil the rice ahead of time so it’s ready to go by the time I’m ready to cook.

Next, I removed about 20 Bocconcini from the liquid in which they come and allowed them to drain thoroughly.

Once the rice cooled sufficiently, I mixed in the tomato paste/sauce, butter, Parmesan cheese and beaten eggs. You can use a spoon or fork but hands really are the best for this. Besides, you’ll have to form the mix in your hands anyway so why make more washing up for yourself? -grin-

Forming the croquettes is messy but relatively easy. Place a spoonful of the rice mixture in the palm of your hand. Squeeze it with the other hand until it holds together. Make a small indentation in the middle and place one of the Bocconcini in the indentation. Cover with another spoonful of rice mixture and squeeze together to form a firm ball. Roll the ball in breadcrumbs and set aside.

Continue forming the croquettes until all the mixture has been used up. I made about 18 croquettes, but they were smallish.

Once the croquettes were formed, I heated the oil in a heavy, cast iron pot rather than a frying pan. The pot was big enough to hold 3 or 4 croquettes and the oil came to about 1/3 of the way up their sides. I allowed the croquettes to fry gently, turning as required. When they were golden brown all over, I eased them out with a slotted spoon and arranged them in a pile on a platter with the avocado dip and the julienned vegetables.

I am the kind of person who always has to know why things are the way they are so my interests range from genetics and biology to politics and what makes people tick. For fun I play online mmorpgs, read, listen to a music, dance when I get the chance and landscape my rather large block. Work is writing. When a story I am working on is going well I'm on cloud nine. On bad days I go out and dig big holes... END_OF_DOCUMENT_TOKEN_TO_BE_REPLACED
This entry was posted on Saturday, August 10th, 2019 at 8:48 pm and tagged with arancini, avocado, Bocconcini, croquettes, Greek-style, Italy, Jalna-joyhurt, Parmesan, rice, vegetarian and posted in Food glorious food, recipes. You can follow any responses to this entry through the RSS 2.0 feed.
« Sometimes you just can’t get a break…
Windows 7 Update – SERIOUS problem »