My review of The Remnant and #Amazon’s new review format

Click on the cover to go to the Amazon page

I’ve just discovered a new, fresh, wonderful voice in sci-fi! The author is Paul B. Spence and the book is The Remnant, book 1 of The Awakening series. Better still, books 2 and 3 have already been published so I have reading material for a couple of weeks at least. 🙂

This is the review I just left on Amazon:

I don’t normally enjoy so-called ‘military’ sci-fi because it often reads like a boys own fantasy with impossible Star Wars type space battles that are completely unrealistic, and woefully unscientific. But /this/, this story seems to be built on real science and real possibilities, no matter how remote. It is also a finely balanced blend of politics, archaeology and psychology where all the elements work together to create a very compelling story. From my point of view, the most compelling part is that the main character is both heroic and damaged. I like him as a hero, but I care for him as a person. This is how all sci-fi should be.

The only negative thing I will say is that the editing could have been better, not in terms of the prose – the prose is crisp, clean and at times almost lyrical – but in terms of the odd missing word, the odd typo. I noted them as I read them, but immediately dismissed them as the story drew me on.

Paul B Spence is a new voice in sci-fi [at least to me] but not for long. This is a storyteller who deserves recognition. Very highly recommended.

Seriously, I wasn’t exaggerating. This man knows how to write. 🙂

Now, to the second part of this post, Amazon’s new review format. It’s quite a departure from the past and has some good points, but also some strange ones. The following is a pic of the review screen as I was writing the review for The Remnant: 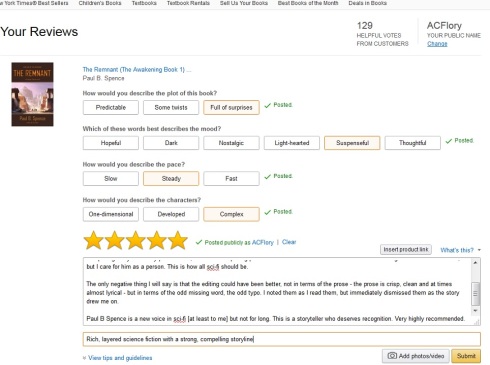 You can click on the pic to see an enlarged version, but the main features should be readable even in this one. The main innovation is the multiple choice meta reviewing now available. You can select options in four major categories – plot, mood, pace and character – to give a kind of snapshot of the book, presumably for people who don’t want to wade through reams of prose.

As an attempt to make the reviewing process less prone to abuse*, I have no issue with the multiple choice categories because they:

To illustrate the second point, let’s say I have some axe to grind with Amazon, or sci-fi in general, or Paul B. Spence in particular. To make my displeasure felt, I can still give The Remnant a one star ranking, but now I also have to provide a less black and white response via the multiple choice questions.

Under plot I could probably select ‘predictable’ as the most negative option, but some readers look for predictability in their reading material. Similarly, selecting ‘slow’ for the pace and ‘one dimensional’ for the character would be construed as negative by some readers but not all. Finally, under mood, I have no ‘bad’ choices at all.

So, all in all, I see the new format as a fairer way of leaving a review, however the lack of real choice in the answers kind of defeats the purpose of a real review. For example, I found the mood of The Remnant to be both ‘suspenseful’ and ‘thoughtful’, but I could only choose one option so therefore that element of the review is already inaccurate.

To be fair, the designers of the new format would have sweated blood getting the multiple choice questions to be as effective as they are. Nevertheless, I would love to have multiple choices per category rather than just one – e.g. ‘select the words that most closely reflect how you feel about…’

All in all, however, I give Amazon a big 3/5 [see the *update below] for the new review format, and Paul B. Spence gets a glowing 5/5.

Man, I love discovering great new authors, especially when they’re **. Please give this man some love. My review brought his total up to just 10. He is obviously as good at marketing as I am. 😦

I am the kind of person who always has to know why things are the way they are so my interests range from genetics and biology to politics and what makes people tick. For fun I play online mmorpgs, read, listen to a music, dance when I get the chance and landscape my rather large block. Work is writing. When a story I am working on is going well I'm on cloud nine. On bad days I go out and dig big holes... END_OF_DOCUMENT_TOKEN_TO_BE_REPLACED
This entry was posted on Friday, November 6th, 2015 at 10:23 am and tagged with 5/5, amazon, fairer, Indie, Kindle, multiple-choice, new-review-format, Paul-B-Spence, science-fiction, The-Remnant and posted in review, Reviews, Sci-fi. You can follow any responses to this entry through the RSS 2.0 feed.
« Australia, #solar panels and #directaction
Feather drawing giveaway »