Okay, first up, I did get through this trial, and I even managed to get a commendation, so this is not sour grapes but… the Chrysalis was nasty. Part of the reason for that was social and part was due to the mechanics of the actual trial.

This is not a walkthrough so I won’t go into every skill Nabriales [the Boss] uses. Instead I want to talk about the two major mechanics – orbs and meteors. And I want to show you what all the important things look like because recognizing what’s what is often the difference between a successful run and a disaster.

In the first phase of the trial, Nabriales will call forth two kinds of orbs to buff himself. One is physical, the other magical and they look like this:

The orbs start at the outer perimeter of the arena and slowly drift into the centre where Nabriales waits. Your job is to stop the orbs from reaching him. Every orb that does reach him applies a buff that will increase the damage of the big AOE he unleashes at the end of this stage. Nabriales will call the orbs twice.

How to stop the orbs

To stop an orb you have to run through it. When you do, the orb explodes and is gone. Unfortunately getting it to explode is not as easy as it sounds. Whether it was a glitch or some odd lag effect, I found that I could not seem to ‘connect’ with some of the orbs. In fact there was one that I ran through about 4 times before it finally exploded.That was not fun.

To make dealing with the orbs harder, you will have to alternate red and black orbs because connecting with 2 or god forbid 3 of the same kind would be bad, very bad.

The glitch and the alternating requirement meant that 8 people were running around, not doing a very good job of stopping these orbs from reaching Nabriales. And when he did his AOE we wiped.

At our next attempt, we survived the first round of orbs only to be felled by the second round.

I think it was about this time that someone from the group ranted about ‘stupid people’. I became a little heated and said we were not stupid, just new. When we had a show of hands, 3 of the 8 admitted to being new to the trial.

Anyway, we kept going which was good as some of the group would have preferred to rage quit.

Then, after 2 lots of orbs and Quake, Nabriales cast Blight and disappeared, leaving a portal in the middle of the arena.

Blight and the portal

Blight is a DoT AOE [damage over time area of effect] that lasts for quite some time and reduces your health the whole time.Blight cannot be avoided and neither can the portal.The problem is they happen at the same time.

If you get sucked into the portal while Blight is still active, the effect will last X amount of time longer so you do NOT want to get sucked in straight away. But how do you avoid getting sucked in too soon?

Simple – you run towards the outer perimeter of the arena, and you watch this little icon count down to zero:

All the guides say to keep running until Blight wears off then pop your buffs just before being sucked into the portal. The reason for popping the buffs is that they are extended on the other side of the portal as well.

I happened to be right next to the portal when it opened the first time and couldn’t even take a step before I was sucked in. Lesson: stay away from the centre. 😦

The next time we faced Blight, I managed to run towards the outer edge of the arena long enough for it to wear off but I could not run and pop my buffs at the same time. You see that pull is damn strong. 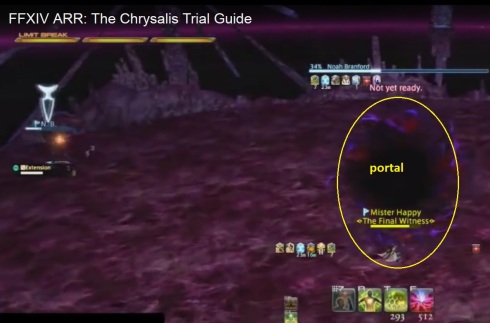 Once on the other side of the portal, you will see a series of circles on the ground: 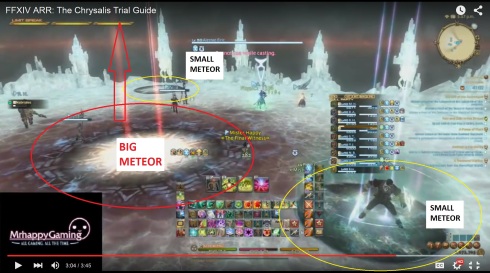 These circles show where the meteors will land. The landing spot of the BIG meteor is circled in red while the smaller ones are circled in yellow. The small meteors come down fast, and if they hit the ground they turn into a ‘tear’.

The way to stop the tears from forming in the first place is to put a tank underneath each small meteor. Of course you will get more small meteors than tanks so eventually a ‘tear’ will form: 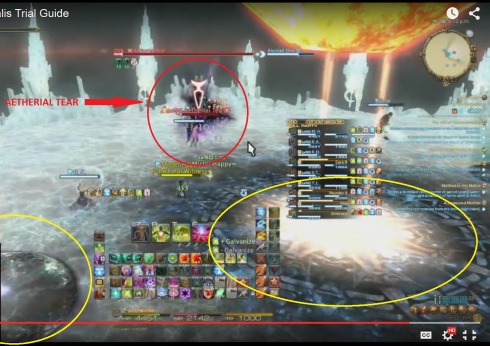 This ‘tear’ has to be destroyed before the big meteor strikes or it’s an instant wipe. If at all possible, save the level 3 Limit Break for the tear.

We also had trouble with this bit because at least one of the tanks had no idea what to do. Instant wipe.

Sadly it was not the experienced players who explained what needed to be done but someone who had only studied the video guides. Any way you look at it, that’s a ridiculous situation, yet it happens time and time again. Information is not gold. You don’t lose anything by giving it away.

The one positive thing I can say is that I got to practise my Swiftcast-Resurrection about five times. 😦

If anyone is interested in seeing MrHappy’s complete video guide, you can find it here:

I am the kind of person who always has to know why things are the way they are so my interests range from genetics and biology to politics and what makes people tick. For fun I play online mmorpgs, read, listen to a music, dance when I get the chance and landscape my rather large block. Work is writing. When a story I am working on is going well I'm on cloud nine. On bad days I go out and dig big holes... END_OF_DOCUMENT_TOKEN_TO_BE_REPLACED
This entry was posted on Monday, September 28th, 2015 at 10:09 pm and tagged with Blight, Chrysalis, Limit-Break, meteors, Orbs, portal, tear and posted in Games for big kids, gaming. You can follow any responses to this entry through the RSS 2.0 feed.
« Mutawintji National Park
Death of Choice – Ilil Arbel »