I’ve had solar hot water since July 2011, and solar panels since November of the same year, but the experience has not been all sweetness and sustainability.

My electricity retailer, Origin Energy, apparently had some difficulty adjusting their processes to the sudden influx of people with solar. I can only assume the wholesaler – SP Ausnet – had similar difficulties because neither company seems to have any knowledge of my solar panels. Which is rather odd when you consider that they have been paying me the top level Solar F.I.T. [Solar Feed In Tariff] since April 2012, off and on.

I would have thought that if Origin knew they had to pay me for my solar contribution they must know that I have solar panels in the first place. Logic, however, is sadly missing in this saga.

Back in 2013, Origin reduced the value of my solar contribution from 66 cents per unit of whatever to 28 cents – all without a word of explanation. It was left to me to query the bill and try to make sense of FIT vs CoGen. That was when I first heard that I was officially a non [solar] person because some documentation was missing.

What followed was months of frustration. I sent snail mail letters via registered mail, demanding answers. They responded, when they did, via phone calls …and nothing in writing.

And then, when I threatened to go to the Ombudsman, suddenly my solar F.I.T. was restored, again without a word of explanation. By this time I was so sick of the whole thing I just gave a silent cheer and let sleeping corporations lie. 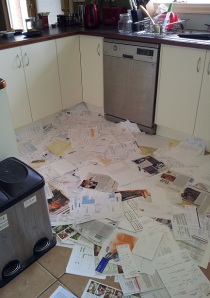 Now, almost a year later, Origin and I are back to square 1. I have just received a letter saying they have been overpaying me and would I please sign the attached forms so they can pay me the measly 28 cent payment.

Well, guess what? Having just spent the entire day sorting through old files [that’s them carpeting my kitchen floor], I’m going to bundle up everything relating to this mess and send it to my solicitor. Win, lose or draw, this time I want answers.

I am the kind of person who always has to know why things are the way they are so my interests range from genetics and biology to politics and what makes people tick. For fun I play online mmorpgs, read, listen to a music, dance when I get the chance and landscape my rather large block. Work is writing. When a story I am working on is going well I'm on cloud nine. On bad days I go out and dig big holes... END_OF_DOCUMENT_TOKEN_TO_BE_REPLACED
This entry was posted on Sunday, November 16th, 2014 at 3:56 pm and tagged with CoGen, Feed-In-Tariff, FIT, Origin-Energy, problems, Solar, solar-hotwater, solar-panels, SP-Ausnet and posted in Australia, My soap box. You can follow any responses to this entry through the RSS 2.0 feed.
« Amazon Kindle Fire HD 6″ – a review
Advertising elevated to an art form! »

14 responses to “Origin Energy and the on-going Solar F.I.T. debacle”