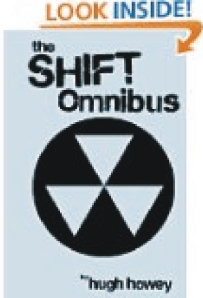 Science fiction author Hugh Howey has been a firm favourite of mine since I read, and reviewed, his novel ‘Half Way Home’. I subsequently read ‘Wool’, the serialized novel that first pushed this unassuming indie writer to stardom. I enjoyed Wool, but it left me feeling as if there should have been something… more.

Shift is that something more.

For those of you who have never read Wool, the story tells of a post-apocalyptic time in the US when the only survivors live in a mammoth silo buried deep underground. This upside-down skyscraper is the only world that generations of survivors have ever known because the world outside is still toxic.

The story is gripping, and fast paced, with strong, likable characters, but the hints about how this all came about, and how the silo really works, only explain the ‘how’ and the ‘now’. They do not go deeper into the ‘why’.

The three novels that together comprise the Shift Omnibus not only provide the historical context that Wool lacks, they provide a chilling glimpse into the political and cultural attitudes that can allow something like this to happen. They also make the reader wonder if something like this could ever happen in real life.

To put it simply, Shift is that rare beast, a series that makes you think. And that is exactly why I delayed this review for so long.

I crave novels that make me think, but I have learned that a lot of readers simply want to be entertained. They want to be taken out of the real world, not seduced into wondering if the world in which they live is really as ‘safe’ as they think it is.

These are the people who publicly objected to George R.R.Martin killing off some of their favourite characters in A Song of Fire and Ice. These are also the people who demand a happy ending no matter what.

Now George R.R.Martin is so big in the world of fantasy that his fans far out-weigh his detractors, but Hugh Howey is a young author with his feet still planted firmly in the indie world. And therein lies my problem. I truly believe Shift is the best thing Howey has written [so far] and the last thing I want to do is put readers off by making them think Shift is too philosophical, or  political, or literary. Or too much like ‘work’.

The hell of it is that Shift is philosophical, political, literary etc., but there is nothing inaccessible about it. Yes there were times when I literally re-read the same sentence again and again – just because the prose was so beautiful. But at the same time there was nothing  ‘arty farty’, or ‘see how many big words I know’ about it.

In the same way, a reader can choose to go deep into the philosophy, or simply enjoy the characters and the plot. This next bit will be a little bit of a spoiler,  but it illustrates my point :

There is a character called Solo in Shift. He has lived in a silo by himself for years, his only companion a little cat. But cats don’t live forever, and one day the cat dies.

Now I love cats, so I was going to be affected no matter what, but I believe even someone who hated cats would be touched because of  Solo’s reaction.  The loneliness radiating from that scene is universal.  It really could make a stone weep. And yet there is not a word of melodrama from start to finish.

So to all those science fiction readers out there,  I’d like to say this –  no matter what you are looking for in a book, you will find it in Shift.

I rarely give out stars because they are so arbitrary, but if pressed I would give Shift a 6/5. It truly is a promise fulfilled.

I am the kind of person who always has to know why things are the way they are so my interests range from genetics and biology to politics and what makes people tick. For fun I play online mmorpgs, read, listen to a music, dance when I get the chance and landscape my rather large block. Work is writing. When a story I am working on is going well I'm on cloud nine. On bad days I go out and dig big holes... END_OF_DOCUMENT_TOKEN_TO_BE_REPLACED
This entry was posted on Sunday, May 26th, 2013 at 4:19 pm and tagged with 6/5, Hugh-Howey, review, science-fiction, Shift and posted in Awesome Indies, BOOKS I have loved, review, Reviews, Sci-fi, Uncategorized. You can follow any responses to this entry through the RSS 2.0 feed.
« A Modest Announcement…
The Lazaretto – a Goodreads R4R »

18 responses to “Shift – a promise fulfilled”