It’s blowing a gale in Warrandyte!

I haven’t been checking the Bureau of Meterology website so I can’t tell you how fast the wind has been blowing, but some of the big gusts have been… scary.

I’ve actually had to close the fire resistant shutters on the north side of the house [wind direction] to protect the French doors from flying junk. Not so paranoid when you see the huge tree branch that landed in my fish pond. I dragged it out to save the fish, and so I could take some photos of it.

I stuck my foot in the next photo to give you some perspective. 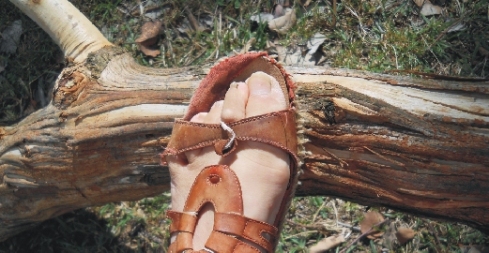 I don’t have a Yeti sized foot, but that is still a thick bloody branch. The length is 5 and a bit metres, and it came from the top third of a gum tree.

When I built this house, I chose a spot that was lightly treed. After the 30/10* ruling came out I only had to chop down two trees, both within just 8 metres of the house.  Now I have close to 15 metres of defensible space around most of the house. That is one reason why that massive tree branch only made a mess of the fishpond.

Had that branch hit the house, it would have done some damage. Broken windows would have been the least of my worries. Something that big could have damaged the sprinkler system on the roof…

Had that branch hit the house during a bushfire, I doubt the house would still be standing. It’s simple really. The shell of a house can withstand quite a lot of fire… until something breaches its integrity – i.e. a broken window or a smashed roof. Once the embers can get inside it’s all over, because everything inside the house is going to be paper dry. Woosh!

And now to end on a happier note, I can finally show you that photo of an emu I took with my mobile phone. 😀

* after Black Saturday, and while the threat of further bushfires was still acute, the then Brumby government decreed that residents of fire prone areas would be entitled to cut down trees within 10 metres of the house. And clear scrub within 30 metres of the house. Without having to apply for and get a permit from their local Council. In Nillumbik, getting a permit to cut down a single tree is as likely as winning the lottery. I know, I’ve tried.

I am the kind of person who always has to know why things are the way they are so my interests range from genetics and biology to politics and what makes people tick. For fun I play online mmorpgs, read, listen to a music, dance when I get the chance and landscape my rather large block. Work is writing. When a story I am working on is going well I'm on cloud nine. On bad days I go out and dig big holes... END_OF_DOCUMENT_TOKEN_TO_BE_REPLACED
This entry was posted on Thursday, March 21st, 2013 at 4:09 pm and tagged with 30/10-ruling, 5-metres, broken-branch, emu, high-wind, Warrandyte and posted in Australia, bushfire, bushfires [Australia]. You can follow any responses to this entry through the RSS 2.0 feed.
« How to use the USB cable to transfer photos from the Samsung Galaxy S II to Windows XP
So you’re tired of hearing about “rape culture”? Reblogged »

25 responses to “It’s blowing a gale in Warrandyte!”