The Ups and Downs of Being Dead – a review

Back in December 2012, I wrote a review on a feel-good novel about dying. That novel was ‘Don’t Tell Anyone’, by Laurie Boris, and it’s still one of my favourite stories, but today’s novel comes a close second. It’s all about being dead. 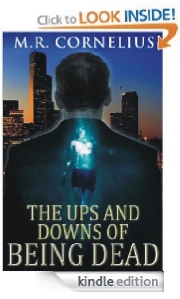 ‘The Ups and Downs of Being Dead’ was written by M.R. Cornelius,  and is a hard novel to categorize. Part science fiction, part ghost story and part love story,  it fuses all three categories into a seamless whole because the core theme is about personal growth.

Confused you yet? I thought so. Let’s go back and start at the beginning.

The story begins with the death of Robert Malone, a successful, 57 year old businessman. As Robert detaches from his body, he sees the cryonics team get to work preparing his corpse for freezing.  But there is one slight problem. Robert was not supposed to be awake to see any of this. He assumed he would die and wake up decades later, when technology was sufficiently advanced to thaw him and cure his cancer.

What is he supposed to do for the next seventy odd years while he waits for technology to catch up? As a ghost, he can’t work a computer, drink a scotch or influence the world of the living in any way. All he can do is sulk,  until two ‘greeters’ take him under their wing.

Greeters are the ghosts of earlier cryonics patients who volunteer to show new arrivals the ropes. They teach Robert how to walk through walls and doors, catch buses and survive in his new, unwelcome state of ghosthood.

Maggie, a dear little-old-lady of a ghost with a will of iron, is determined to help Robert accept the possibilities of his new ‘life’. But first he has to come to terms with his old life, which was less than happy.

And so Robert’s journey begins. Along the way he discovers his wife has been unfaithful to him, and then has to stand in impotent horror as their drug addicted son shoots her. How much responsibility should Robert shoulder for the way his family has turned out?

As a woman who used to be married to a driven entrepreneur, I found myself nodding an awful lot during Robert’s soul-searching. However if  ‘Ups and Downs’ had been about nothing but finger wagging, I would have lost interest very quickly. Luckily, ‘Ups and Downs’ was also incredibly funny in spots, and the love story that develops between Robert, and an ordinary ghost called Suzanne, really touched me.  You see Suzanne has no body to reanimate, so when Robert is thawed, their time together will be over.

If you want to know how the story ends you’ll have to buy the book. For now I’d like to say a few things about the science fiction elements. The story spans 70 odd years so you would expect everyday consumer technology to change, and it does. The author weaves the technology into the story so cleverly that it never overshadows the characters, but it is there, and as a sci-fi buff I was delighted with some of the gadgets Cornelius comes up with. The all seems quite… plausible.

The only part of the story I thought I might have trouble with was the whole ‘ghost’ thing. I don’t believe in ghosts, at all. Yet despite my skepticism, I found myself accepting the supernatural aspects of the story without feeling uneasy. Part of the reason for that was because the author did not indulge in any metaphysical mumbo jumbo. Being a ghost was just something that happened. There are a couple of nice passages where the ghosts discuss how becoming a ghost might happen, but it is done in a natural way, as if they’re discussing a dip in the stock market, or a spate of bad weather.

And finally a word about that character development/personal growth I mentioned. There were a couple of small areas where the author could have been a tiny bit more subtle, but overall, Robert’s growth over the decades of waiting feels right. And makes the ending such a pleasurable, uplifting climax to the story.

There is nothing average about ‘The Ups and Downs of Being Dead’. In fact I’d call it a must-read for anyone who is sick of the same, tired old themes. I loved it. 😀

I am the kind of person who always has to know why things are the way they are so my interests range from genetics and biology to politics and what makes people tick. For fun I play online mmorpgs, read, listen to a music, dance when I get the chance and landscape my rather large block. Work is writing. When a story I am working on is going well I'm on cloud nine. On bad days I go out and dig big holes... END_OF_DOCUMENT_TOKEN_TO_BE_REPLACED
This entry was posted on Sunday, February 3rd, 2013 at 5:06 pm and tagged with Don't-tell-anyone, excellent-read, M.R.Cornelius, personal-growth, science-fiction-ghost-romance, The-Ups-and-Downs-of-Being-Dead and posted in Awesome Indies, BOOKS I have loved, review, Reviews. You can follow any responses to this entry through the RSS 2.0 feed.
« K.D.Rudd as you’ve never seen him before!
An alpaca update and… a favour »