Ghost in the Machine – a review 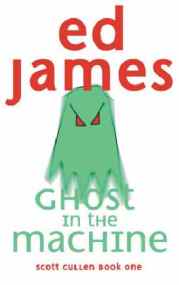 A woman is sitting in a bar, waiting for someone, presumably her date, to arrive :

“She looked for anyone vaguely resembling Martin’s photo on Schoolbook. Nobody even came close.”

And there you have the two, short sentences that convinced me to buy Ed James’ ‘Ghost in the Machine.”

Like a lot of Kindle owners, many of my ebook purchases are fairly impulsive and this book was no exception. It caught my interest so I bought it. Only later, when I began reading it did I realise that this was a police procedural. And that it was set in Edinburgh, with many of the place names I’d grown used to from reading Ian Rankin’s Inspector Rebus series.

And right there is the one real problem I have with the Ghost in the Machine – I can’t help comparing it to Ian Rankin’s creation, even though Scott Cullen, the young policeman in Ghost in the Machine, is nothing like Inspector Rebus. Or perhaps because he is like the person Rebus might have been in his youth, before disillusionment and alcohol killed his joie de vivre [love of life for those who don’t want to look it up] and turned him into such a complex and compelling character.

Sadly, Scott Cullen is not all that compelling. He is likable, and just as smart as Rebus, but he lacks the depth that makes Rebus someone who tugs at the heart strings.  I care about Rebus. I’m not sure I care about Scott Cullen, however as this is book 1 of the series the author may develop Cullen a little more in the later books.

So, the worst thing I can say about Ghost in the Machine is that it lacks the character development of one of my favourite fictional characters. Everything else, however, is excellent. The plot is tight and kept me guessing right till the end. The background feels authentic, and the cast of supporting characters often seem to be more vivid than the main character himself. The dialogue, too, is good. Every so often the author reproduces an accent in the dialogue, if it is particularly relevant, and I found it was just enough to add flavour without becoming difficult to read. Others may disagree with me on that one, but I loathe flat dialogue where everyone sounds the same.

Now to the big question : did I enjoy Ghost in the Machine?

The answer is a surprising ‘Yes’.

Despite the fact that Ghost in the Machine was written by an indie author, instead of a famous one, did not have the benefit of a professional editor [yes, there are a few typos but only a few], and did not quite have enough character development for my tastes, the story was such a good read that I intend to buy the next book in the series.

I’m also putting Ed James on my Watch List because he is a young author going places. Highly recommended.

I am the kind of person who always has to know why things are the way they are so my interests range from genetics and biology to politics and what makes people tick. For fun I play online mmorpgs, read, listen to a music, dance when I get the chance and landscape my rather large block. Work is writing. When a story I am working on is going well I'm on cloud nine. On bad days I go out and dig big holes... END_OF_DOCUMENT_TOKEN_TO_BE_REPLACED
This entry was posted on Sunday, November 18th, 2012 at 8:40 pm and tagged with author-Ed-James, Ghost-in-the-Machine, highly-recommended, hints-of-Rebus, Ian-Rankin, police-procedural and posted in Awesome Indies, BOOKS I have loved, review, Reviews. You can follow any responses to this entry through the RSS 2.0 feed.
« Super-Secret Friday Night 5-Minute Dance Party [Partir]
50,096 – and now a word about nanowrimo 2012 »

19 responses to “Ghost in the Machine – a review”