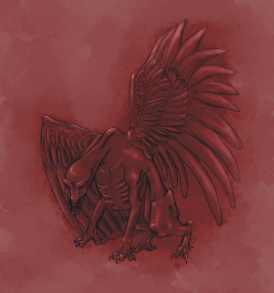 The Kaa are the second largest and most ferocious predators on Vokhtah, second only to the Vokh.

The iVokh call them the Red Daemons because their red-on-red colouring allows them to drop out of a clear orange sky with virtually no warning.

In build the Kaa come closest to resembling earth birds of prey with deep chests, very powerful flight muscles and  true feathers which give them exceptional flying power and maneuverability in the dense air and lighter gravity of Vokhtah .

Unlike terran birds however the Kaa have four limbs and their heads are not at all bird-like. Kaa have large, forward facing eyes topped by bony brow ridges that protect the eyes beneath from all but the most accurate attack.  Scales cover every fingerwidth of their faces right down to the tips of their narrow snouts and huge flaring nostrils. Below the snout the lower jaw juts out slightly beyond the upper jaw, both of which are equipped with rows of razor-sharp teeth. These teeth scissor backwards and forwards and can cut through flesh, bone and gristle with equal ease [much like to’pak].

When it comes to straight flight the Kaa are better flyers than most Vokh however they lack the jetting and hovering ability of the Vokh and this is why the average Vokh will always defeat the average Kaa. The Matriarchs amongst the Kaa are a different matter however. They are permanently female and are bigger and stronger than the males. When they have nestlings the Matriarchs become so protective and so ferocious that even the highest ranking Vokh think twice about attacking them. Only the Nine can defeat them with ease.

On the ground however even the Matriarchs are at a disadvantage as their short powerful legs are designed for lifting off the ground not running. Their long, powerful talons also become a liability on the ground, sinking deep into soft ground and providing little purchase on rock.

This vulnerability is why the Kaa usually scavenge in flights of two or more. Each flight is lead by a Matriarch and can include up to four of the smaller males. The size of the flight depends upon the age and strength of the Matriarch as she is the one who must keep her mates from fighting amongst each other.

Once a Matriarch has nestlings she hunts alone and relies on the camoflage of her colouring, speed and her great cunning to catch live prey for her offspring. Teaching her nestlings to kill and eat live prey is the first step in teaching them to hunt for themselves.

The cunning and ferocity of Matriarchs is legend amongst the Vokh and the iVokh however most still think of the Kaa as simple beasts. Only a very few of either race have ever considered the possibility that the Kaa might actually be more intelligent than ordinary predators.

This short extract provides an insight into the behaviour of these unusual beasts :

‘High above the two iVokh the Kaa Matriarch dropped down out of the orange disk of Takhti like a silent red shadow.

She had been searching for the killer of her nestlings ever since she had returned to the nest to find them both gone.

When she had finally found their bodies they had been covered in the stench of the creature that had killed them, yet the smell had not been that of the hated Black One and so she had followed the scent trail from the spot where her offspring had been killed to the shore of the big water and from there up almost as high as the place of killer winds where the trail had disappeared.

Since then she had been criss-crossing the grasslands hoping to pick up the trace again and now she knew she was very close.’

I am the kind of person who always has to know why things are the way they are so my interests range from genetics and biology to politics and what makes people tick. For fun I play online mmorpgs, read, listen to a music, dance when I get the chance and landscape my rather large block. Work is writing. When a story I am working on is going well I'm on cloud nine. On bad days I go out and dig big holes... END_OF_DOCUMENT_TOKEN_TO_BE_REPLACED
This entry was posted on Friday, June 15th, 2012 at 11:38 am and tagged with extracts, ivokh, Kaa-Matriarchs- protective-and-ferocious, Kaa-nestlings, predator, red-feathers-red-scales, The-Kaa, The-Vokhtan-Bestiary, Vokh and posted in science-fiction, Uncategorized, Vokhtah. You can follow any responses to this entry through the RSS 2.0 feed.
« Open letter to Nillumbik Shire Council
Joe Cafe by J.D.Mader – a review »

8 responses to “Vokhtan Bestiary – the Kaa”